Statistical highlights of the Asia Cup 2014 match between Bangladesh and India.

Statistical highlights of the Asia Cup 2014 match between India and Bangladesh on Wednesday at Fatullah.

# Virat Kohli (136 off 122 balls) has established a record for the highest individual innings by a captain at the Asia Cup, surpassing the 135 not out by Sourav Ganguly vs Bangladesh at Dhaka on May 30, 2000.

# In his last seven innings in ODIs in Bangladesh, Kohli has posted five hundreds — three vs Bangladesh and one each against Sri Lanka and Pakistan. He became the first batsman to post three hundreds in India-Bangladesh One-Day Internationals (ODIs).

# Kohli is the first batsman to record five hundreds in ODIs in Bangladesh — his tally being 868 at an average of 124.

# The above two centuries are the only ones for Bangladesh vs India in ODIs — both in a losing cause.

# Rahim’s superb knock is the highest by a Bangladeshi captain in ODIs, eclipsing the 109 off 126 balls by Mohammad Ashraful against UAE at Lahore on June 24,2008 — both at the Asia Cup.

# Shakib Al Hasan’s tally of three hundreds as captain is a record for Bangladesh in ODIs.

# After eight ODIs in succession without a victory away from home, India have registered a win — India’s last overseas win was by seven wickets against Zimbabwe at Bulawayo on August 3, 2013.

# Ten centuries have been registered by captains at the Asia Cup. Only Shahid Afridi has recorded two as captain.

# Mushfiqur Rahim and Virat Kohli have provided the second instance of rival captains scoring hundreds in the same ODI — the first being in an ODI between England and Ireland at Dublin on September 3, 2013 — William Porterfield (112) and Eoin Morgan (124 not out).

# Kohli took just 124 innings to reach 19 hundreds in ODIs — a record for this feat, outstripping Chris Gayle’s feat of reaching the landmark in 189 innings.

# Twelve centuries have been registered in successful chases by the Indian captains in ODIs. Sourav Ganguly holds a record with four followed by two each from Sachin Tendulkar, Gautam Gambhir and Virat Kohli and one each from Rahul Dravid and Mahendra Singh Dhoni.

# Kohli has received his 18th Man of the Match award in ODIs — his second against Bangladesh.

# Ajinkya Rahane (73 off 83 balls) has posted his highest score overseas — his second highest in ODIs behind the 91 vs England at Mohali on October 20, 2011. His fourth fifty in ODIs is his first against Bangladesh.

# Kohli and Rahane were associated in a third-wicket partnership of 213 — India’s highest for any wicket at the Asia Cup, bettering the 205 between Gautam Gambhir and Kohli for the second wicket against Sri Lanka at Dhaka on March 13, 2012.

# Haque’s above innings is his highest in a losing cause and the highest by a Bangladeshi opener against India at the Asia Cup.

# Haque and Rahim were associated in a stand of 133 for the third wicket — Bangladesh’s highest partnership for any wicket against India in ODIs, eclipsing the 113 for the second wicket between Jahurul Islam and Tamim Iqbal at Dhaka on March 16, 2012.

# Mohammed Shami (four for 50) has recorded a career-best bowling performance in ODIs — his second instance of four-wickets in an innings.

# Shami became the second Indian bowler to capture four wickets in an innings vs Bangladesh at the Asia Cup. Virender Sehwag had claimed four for six at Dambulla on June 16, 2010. 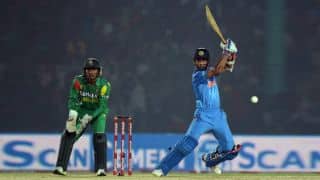