India won the opening encounter of the Asia Cup 2016 against Bangladesh by 45 runs.

A look statistical highlights of the opening match of the Asia Cup2016 between India and Bangladesh. India beat Bangladesh by 45 runs, courtesy of an excellent half-century from Rohit Sharma, all-round show from Hardik Pandya and an excellent spell of bowling from Ashish Nehra. India posted 16 in their first innings, but Bangladesh could manage 121 as they kept losing wickets at regular intervals. India make a good start to the tournament, playing Pakistan in their next encounter. Bangladesh on the other hand play against United Arab Emirates (UAE) and will look to get off the mark in the tournament. FULL CRICKET SCORECARD: India vs Bangladesh, Asia Cup T20 2016, Match 1 at Dhaka

6.  The aforesaid knock is the highest by an Indian batsman in T20Is in Bangladesh, bettering the 77 by Virat Kohli vs Sri Lanka at Dhaka on April 6, 2014. READ: Ashish Nehra, Rohit Sharma star as India thrash Bangladesh by 45 runs in Asia Cup T20 2016 opener

8. Rohit Sharma has received his third Man of the Match award in T20Is – his first two were against South Africa at Durban in 2007 and 2011.

10. Ashish Nehra’s superb bowling performance of 3 for 23 is his best against a Test-playing nation in T20Is – his second best in all next only to the 3 for 19 vs Afghanistan at Gros Islet on May 1, 2010. READ: MS Dhoni says, India need to be patient with Yuvraj Singh; praises Ashish Nehra for his disciplined routine

14. Rohit has amassed eleven fifty-plus innings (a hundred and ten fifties) in 44 innings – the second highest tally by an Indian batsman in T20Is next only to the twelve by Virat Kohli.

16. Hardik Pandya and Rohit were involved in a stand of 61 – the highest fifth-wicket partnership for India vs Bangladesh in T20Is.

17. The above partnership is the second highest for any wicket behind the 100 for the second wicket between Kohli and Rohit at Dhaka on March 28, 2014.

18. Rohit, with 175 runs at an average of 58.33 in three matches, including two fifties, is the top run-scorer in T20Is involving India and Bangladesh.

19. Mahendra Singh Dhoni, with 31 catches, has set a record for most catches by a wicketkeeper in T20Is, eclipsing the 30 by Denesh Ramdin for the West Indies. 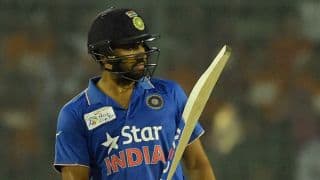