The doodle is the fourth launched by the search engine giant for the ongoing World Cup.

Google has come up with a doodle for the ICC Cricket World Cup 2015 quarter-final between India and Bangladesh, which is scheduled to take place on Thursday, March 19 at the Melbourne Cricket Ground (MCG). The doodle features the silhouettes of six batsmen, playing different strokes, along with the flags of the two countries. Read: India vs Bangladesh ICC World Cup 2015 quarter-final Preview

The doodle is the fourth to be released for the events of the ongoing mega-event, the American search engine releasing special doodles for the opening day of the tournament, the India vs Pakistan match at Adelaide and the Sri Lanka vs South Africa quarter-final at Sydney. Live Cricket Updates and Commentary: India vs Bangladesh ICC Cricket World Cup 2015 Quarter-final 2 at Melbourne

Google has been actively involved with cricket in the recent past, launching doodles during the ICC World Twenty2o 2014 Final, as well as during the 2007 and 2011 editions of cricket’s marquee event. ICC Cricket World Cup 2015: Complete Coverage

India and Bangladesh face off in what promises to be a high-voltage clash at the MCG. While India enter the match as favourites, having won all of their matches in the group stages, they cannot afford to take the Bangladeshis lightly at any cost. Bangladesh, who have been cricket’s whipping boys for a long time now, registered a memorable 15-run victory against England at Adelaide. The win helped them qualify for the knockout stage of a World Cup for the first time, as well as eliminated England from the tournament in the first round itself. ICC Cricket World Cup 2015: SCHEDULE & MATCH DETAILS 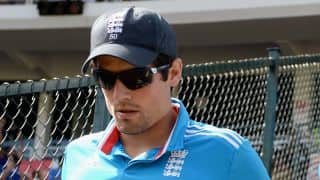