It was a struggle for the Indian batsmen throughout after they were invited to bat at the Feroz Shah Kotla.

There were no demons in the wicket but none of the Indian batsmen could play a substantial knock as the hosts settled for a below-par 148 for six in the opening T20 International against Bangladesh here on Sunday.

It was a struggle for the Indian batsmen throughout after they were invited to bat at the Feroz Shah Kotla.

At the top, after skipper Rohit Sharma’s early dismissal, Shikhar Dhawan scored at a slow pace, managing just 41 off 42 balls.

Dhawan, who has been struggling to find his touch since his comeback, was the top scorer for India but he consumed seven overs before running himself out and it affected the team’s scoring rate.

Much was expected from India’s young brigade but save Shreyas Iyer, none took the attack by the scruff of its neck.

Had it not been for some gritty stroke-making by Washington Sundar (14 off 5 balls) and Krunal Pandya (15 off 8 balls), India would not have got close to the 150-run mark.

India skipper Rohit, playing his 99th T20I, began by glancing the first delivery from Shafiul to the boundary ropes and also cover drove the paceman for another four as the hosts made a flying start.

However, Islam cut short Rohit’s stay by trapping him before the wicket in the fifth ball.

KL Rahul and Dhawan struggled to stroke freely and it took the left-handed batsman 13 balls to find his first boundary off Mustafizur Rahman.

Iyer, who has captained Delhi Capitals in IPL at this ground, got into act immediately, striking a massive six, an inside-out shot off-spinner Aminul Islam.

The young batsman kept looking for big shots and dispatched one into the stands off Islam while Dhawan continued to struggle.

Iyer went after Aminul again but was caught by debutant Mohammed Naim near the boundary ropes. 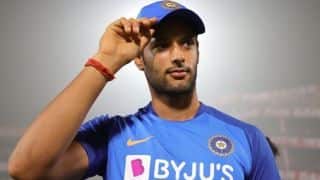 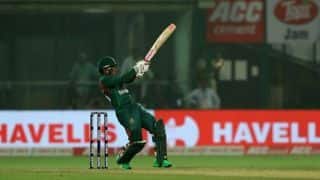