All six of the ODIs between these teams at neutral venues have been won by the team that batted second.

As AFP reported, eight of the last completed 10 one-day internationals between these sides has been won by the chasing team. However, the most recent clash, at Dhaka in June 2014, saw India successfully defend a total of 105, bowling Bangladesh out for 58. Virat Kohli (506) needs 87 runs to pass Gautam Gambhir (592) as India’s leading run-scorer in ODIs against Bangladesh. Kohli has reached 50 in five of his six innings against Bangladesh (three of which have been converted into centuries), averaging 126.5 with a strike rate of exactly 100. That average of 126.5 is the highest any player holds against an opponent, minimum 500 runs scored. All six of the ODIs between these teams at neutral venues have been won by the team that batted second. India have won five of these contests, Bangladesh’s victory coming at the 2007 World Cup. India vs Bangladesh ICC Cricket World Cup 2015, Quarter-Final 2, Preview

Since falling for a first ball duck in his first World Cup innings when batting second in 2007, MS Dhoni has hit 281 runs (two dismissals) in six knocks when chasing — India have won all six games. Since the start of the 2007 World Cup Dhoni has been dismissed once by bowlers in the Bangladesh squad, scoring 142 runs from 155 balls faced. No Bangladesh batsman hit a century in any of the team’s first 28 matches at World Cups — there have been two in the last two, both recorded by Mahmudullah. Live Cricket Updates and Commentary: India vs Bangladesh ICC Cricket World Cup 2015 Quarter-final 2 at Melbourne 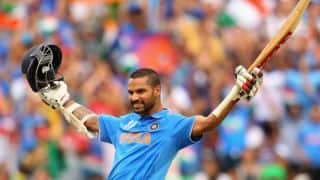