Bangladesh will be looking to play out of their skins and pose a serious threat to India.

(India clash with Bangladesh in the ICC World T20 2014 at Dhaka on March 28. Catch Live Cricket Score of the match in our updates below).

India qualify for the ICC World T20 2014 tournament’s semi-final with a big win over Bangladesh,  who are out of the tournament. MS Dhoni would be pleased with his side’s performance in the three matches. India will be seen in action next on Sunday when they take on Australia. Read Shrikant Shankar’s report of the match here.

India 141/2 Overs 18.3
MS Dhoni 22(12), V Kohli 57(50)
Dhoni finishes off in style with a six straight down the ground off Ziaur. It’s been a comprehensive win for the Indians, as they qualify for semi-finals. Bangladesh are out of the tournament.

Bangladesh fought back well to post a challenging total against India. From 21 for three, they have reached 138 for seven after 20 overs. Fine effort from Mahmudullah, Anamul Haque, Mushfiqur and even Nasir Hossain. Stay tuned for India’s chase in sometime. Meanwhile, read Shrikant Shankar’s innings report here.

Bangladesh 138/7 Overs 20
Mahmudullah 33(23), Mortaza 6(2)
Amit Mishra strikes on the first ball as Nasir Hossain is stumped, and Ziaur Rahman is caught on the second ball by Ravindra Jadeja. Excellent final over till a six was hit off the final ball.
OUT! N Hossain st Dhoni b Mishra 16(17), Ziaur Rahman c Jadeja b Mishra 0(1)
Bangladesh 131/5 Overs 19
N Hossain 16(16), Mahmudullah 32(21)
Bhuvneshwar Kumar is hit for a boundary by Nasir Hossain on the first ball. The bowler keeps it tight in the remainder of the over to give away only three more runs. Bangladesh add seven more runs to their total.
Bangladesh 124/5 Overs 18
N Hossain 10(11), Mahmudullah 31(20)
Mahmudullah gets two boundaries off Mohammed Shami. The first is hit towards the midwicket region and the second one comes through an inside edge that goes past MS Dhoni. Excellent running by the two batsmen, who have now added 42 runs for the sixth wicket.
Bangladesh 110/5 Overs 17
N Hossain 7(9), Mahmadullah 21(16)
Mahmudullah manages to find a gap between three men at the point area to get a boundary. Good over from Bangladesh’s perspective as 12 runs were scored off Mishra.
Bangladesh 98/5 Overs 16
N Hossain 6(7), Mahmudullah 10(12)
Ravichandran Ashwin comes on to bowl his final over in the game, and Bangladesh batsmen manage eight runs off him. Mahmudullah gets a boundary on the second last ball.
Bangladesh 90/5 Overs 15
N Hossain 4(4), Mahmudullah 5(9)
Mahmudullah hits a boundary off Jadeja’s second last ball in the over. The hosts add another five runs to their total. Bangladesh desperate to get some good overs here.
Bangladesh 85/5 Overs 14
N Hossain 3(3), Mahmudullah 1(4)
Bangladesh in tremendous pressure now. India have deployed spin from both the ends and there are new batsmen at the crease.
Bangladesh 82/5 Overs 13
N Hossain 1(1)
Big wicket! Anamul Haque is cleaned up by Amit Mishra as the entire stadium is stunned. Mishra sends down a classic googly, and the batsman failed to read it. Bangladesh add six runs in that over as four had come through byes.
OUT! A Haque b A Mishra 44(43)
Bangladesh 76/4 Overs 12
A Haque 42(37), N Hossain 1(1)
Anamul is waging a battle alone here. Slams Jadeja for a six over the extra cover region as Bangladesh add another nine runs to their total.
Bangladesh 67/4 Overs 11
A Haque 34(32)
Mohammed Shami comes onto bowl his second over of the match. Anamul looks in good rhythm as he clobbers one six over the cover region, and Mushfiqur rubs salt in the wound with a cracking boundary through point. But the bowler has the final laugh, getting the Bangladeshi captain caught by Virat Kohli for 24.
OUT! M Rahim c Kohli b Shami 24(21)
Bangladesh 56/3 Overs 10
M Rahim 20(10), A Haque 28(28)
Amit Mishra comes into the attack to bowl the 10th over of the match. Only five runs scored off the leg-spinner.
Bangladesh 51/3 Overs 9
M Rahim 18(17), A Haque 24(25)
Bangladesh cross the 50-run mark in the 9th over of the match. Mushfiqur gets two boundaries as the hosts are recovering quite well after those initial blows.
Bangladesh 43/3 Overs 8
M Rahim 10(11), A Haque 24(25)
Bangladesh batsmen are trying to attack the Indian spinners in a bid to spoil their plans. After Anamul’s mistimed stroke, Mushfiqur gets a boundary on the midwicket region off Suresh Raina. Eight runs scored in that over.
Bangladesh 35/3 Overs 7
M Rahim 4(8), A Haque 23(21)
Anamul is lucky as a mistimed stroke off Ravindra Jadeja at backward point region. Good over for Bangladesh as seven runs come off Jadeja’s first.
Bangladesh 27/3 Overs 6
M Rahim 2(5), A Haque 17(18)
Anamul breaks the shackles with a lofted shot over the cover fielders for a boundary, off Ashwin. Bangladesh will have to be wary as there is more spin in store. Five runs scored off that over.
Bangladesh 21/3 Overs 5
M Rahim 1(3), A Haque 13(14)
Big wicket!!! Shakib Al Hasan gets an inside edge, and the ball crashes into the wickets after deflecting from the pads. Bangladesh in tremendous pressure as Shakib has been their key performer in past couple of matches. India have pulled back things in control as for the second consecutive over only one run has been scored.
OUT! Shakib Al Hasan b Bhuvneshwar Kumar 1(2)
Bangladesh 21/2 Overs 4
Shakib Al Hasan 1(1), A Haque 13(12)
Two wickets in that over! Tamim Iqbal is caught in the first slip by Suresh Raina off Ravichandran Ashwin as his poor form continues. Further trouble for the hosts as Shamsur Rehman hits the very first ball in the air, and is caught at deep midwicket. Double breakthroughs or India!
OUT! Tamim Iqbal c Suresh Raina b R Ashwin 6(10), S Rahman c Rohit b Ashwin 0(1)
Bangladesh 20/0 Overs 3
T Iqbal 6(8), A Haque 13(10)
Poor effort from Shikhar Dhawan in the field. Anamul nudges one down the wicket and Tamim sets off for a single. The non-striker is denied the run as Dhawan is close to the ball, but instead of walking to the wickets and dislodging the bails, Dhawan dives and misses out on a direct hit. It was a very simple chance missed out by the fielder. Dhoni not impressed. Only five runs scored off that over from Mohammed Shami.
Bangladesh 15/0 Overs 2
T Iqbal 6(8), A Haque 9(4)
Ravichandran Ashwin comes on to bowl the second over of the match. Bangladesh batsmen can manage only two runs off it.
Bangladesh 13/0 Overs 1
T Iqbal 5(3), A Haque 8(3)
Tamim Iqbal starts off with a boundary over the slips on the second ball of Bhuvneshwar Kumar’s over. Anamul too joins in his partner as he cracks one through the covers on the fourth ball. The final ball is hit for another four, this time towards the leg side.

India captain MS Dhoni won the toss and elected to field against Bangladesh.

Hello and welcome to CricketCountry’s live blog of Match No. 24 in the ICC World T20 2014 between the Bangladesh and India from Group 2 at Dhaka. This is Devarchit Varma and I will be bringing you all the live updates of this match. India have shown superb form so far in the tournament, registering comfortable wins over two T20 heavyweights; Pakistan and West Indies.

Bangladesh, on the other hand, will be desperately looking to get back into some reasonable form, and at least pose a challenge to the dominant Indians. 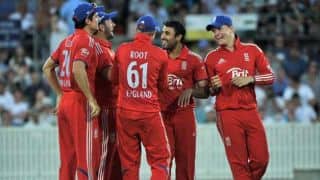