India made a shaky start to their one-off Test against Bangladesh, losing their opener KL Rahul cheaply on Day One at the Rajiv Gandhi International Stadium in Hyderabad.

India made a shaky start to their one-off Test against Bangladesh, losing their opener KL Rahul cheaply on Day One at the Rajiv Gandhi International Stadium in Hyderabad. Electing to bat first, India would not have wanted to lose an early wicket but Rahul fell to an excellent set-up by Taskin Ahmed in the very first over of their innings. India 24 reached for 1 in 8 overs as Cheteshwar Pujara and Murali Vijay adopted a cautious approach against Bangladeshi new ball pair of Taskin and Kamrul Islam Rabbi. Pujara was batting on 10 not out, while Vijay was 12 on not out. Interestingly, no boundary was hit in the first 5 overs in the contest. LIVE CRICKET SCORECARD: India vs Bangladesh, one-off Test at Hyderabad

Earlier in the day, India won the toss and elected to bat. While it was expected that Karun Nair would have to make way for Ajinkya Rahane despite scoring 303 in his previous Test, India surprised many by picking up three fast bowlers for this Test on a batting wicket. India have included Ishant Sharma, Bhuvneshwar Kumar and Umesh Yadav for this contest. Nair thus became a part of a very exclusive group of cricketers who were dropped after scoring more than 100 in their previous Test, and along with him was Jayant Yadav who too had the similar fate. LIVE CRICKET UPDATES: India vs Bangladesh, one-off Test: Day 1

The Bangladeshi fast bowlers were very impressive in their effort. They exploited the early morning conditions generating some amount of swing, got dangerous bounce and kept Indians under pressure. Rahul was dismissed in the first over, when after a couple of short deliveries outside off, he was lured into going for a drive on a fuller delivery. Without moving his feet much, he chased the delivery and got an inside edge. The ball crashed into his wickets after hitting his pads. 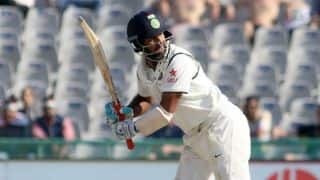