India cruised to the final of ICC Champions Trophy 2017, walloping Bangladesh by 9 wickets at Edgbaston.

India cruised to the final of ICC Champions Trophy 2017, walloping Bangladesh by 9 wickets at Edgbaston. Almost everything went India’s way. Their bowlers staged a comeback in the middle overs after Tamim Iqbal and Mushfiqur Rahim added 123 for the third wicket. Kedar Jadhav, the man with a golden arm, dismissed the duo. Bangladesh, once threatening to post something beyond 320, managed only 264 for 7 in 50 overs. In reply, India smashed Bangladesh to pulp and attained the target in 40.1 overs. Rohit Sharma scored his 11th ODI hundred and second against Bangladesh in an ICC tournament while Kohli eased to an unbeaten 96. Full cricket scorecard: India vs Bangladesh

It was the most elegant of chases by India. Shikhar Dhawan pulled with abandon. Kohli painted his cover-drives. Rohit flipped through the textbook and perhaps enhanced a few strokes. In fact, the chase got so boring midway that every shot looked like a replay of the previous. At one point it looked like a warm-up match for India to prepare for the final against Pakistan. Yes, such was Bangladesh’s performance in their first ever semi-final.

Let us not actually blame this match. The ones before this had ups and downs. This one had ups for India and downs for Bangladesh, especially in the second innings.

Before that, Bangladesh had boggled India in the first half of the first innings after they were put to bat. The dark clouds hovered over, but there was no rain interruption whatsoever. Tamim Iqbal continued his domination against India. After Bangladesh lost Soumya Sarkar in the very first over, the onus rested on Tamim. Amidst this, Sabbir Rahman made full use of the nature of the track and played a brisk 21. However, Bhuvneshwar Kumar had him caught at point off a knuckle ball.

Rahim complemented Tamim very well and collected boundaries at regular intervals. India were in trouble. They had no counterattack for Tamim and Rahim’s resilience. From Ravichandran Ashwin to Ravindra Jadeja, Kohli used all his ammunition to remove the Bangladeshi duo.

Kohli had no option but to go to the part-timer. There was always Yuvraj Singh, but he has not bowled in a while. Dhawan was banned once and did not even bother to correct his action. Why would he? Rohit can roll his arm over with his off-spinners, but Kohli prefers himself over him. That leaves Jadhav, who had taken 5 wickets in a 3-ODI series against New Zealand over half a year ago.

Jadhav, of all the bowlers, gave Kohli a respite. He bowled slowest of balls to knock over Tamim. Two overs later he bowled the juiciest of full-tosses to have Mushfiqur caught at mid-wicket. And India got the breakthrough from the unlikeliest of sources.

Then began the downhill journey. Shakib Al Hasan, Mahmudullah, and Mosaddek Hossain added a mere 51 between them. Thanks to Mortaza and Taskin Ahmed’s thick bats that Bangladesh collected vital runs in the death off their edges.

Bhuvneshwar Kumar and Jasprit Bumrah picked up 2 wickets each while Jadeja got Shakib.

Bangladesh had reached the quarter-final of World Cup 2015. They now reached a semi-final of Champions Trophy 2017. From being the underdogs, Bangladesh have come a long way in the shorter formats.

“We need to be mentally strong. Skill-wise we are good,” said Mortaza at the post-match presentation. 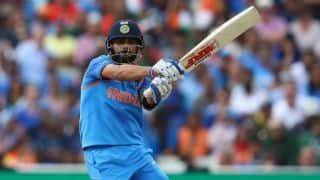