Bengaluru: Mahendra Singh Dhoni was all praise for young Hardik Pandya, who held his nerve during the last few moments and executed the instructions brilliantly by not bowling a yorker to Shuvagato Hom, which could have turned into a full-toss. “There were quite a few stuff we were discussing, one thing was for sure, we did not want him (Hardik) to bowl a yorker. It had to be a back of a length, but how back of a length, that was the question. You don’t want to bowl a wide. FULL CRICKET SCORECARD: India vs Bangladesh, T2o World Cup 2016, Match 25 at Bengaluru

We were deciding out field and I think he executed really well. It’s nice to have hood plans but the plan only looks good when it is executed well,” Dhoni said at post-match presentation ceremony. Dhoni did not reveal his mid-pitch conversations with veteran Ashish Nehra. “I don’t want to say everything but the decision was what length to bowl, what line to bowl. If you are going for yorkers, what is the field and also keep in mind about the strength of the yorker. And also I knew, once the 20th over starts, you can take all the time you want. I can’t be fined,” Dhoni said cheekily.

“Often it does, at times you look to finish it with the big shot. And if you think you have wickets in hand, you think others can finish it. And when you are batting well, you go for your shots. Its a learning curve for Mahmudullah as it happens with all finishers. That’s what cricket is all about, If that had gone for a six, it was a great shot. Great courage. That’s what cricket is. A commentator can have a look later and say whether it was a bad shot or not,” Dhoni said with his tongue firmly in cheek.

“Bumrah bowled really well, the second over that he bowled, he was under pressure, with the field restrictions. It was a reflection of his misfield and the dropped catch, but he had to forget about what happened and that’s what we told. I feel he is somebody who is very good with the yorkers and he did very well.

“There were two occasions when we had to make the game and instead of using our part-timers and we bowled our frontliners. It was a very good bowling effort.” 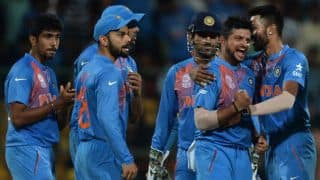