Searching for a way to break the seventh-wicket stand, Kohli bowled two overs on Friday.

On a day of toil against a Cricket Australia XI at the Sydney Cricket Ground, India captain Virat Kohli brought himself on to bowl in search of wickets as the seventh-wicket pair of Harry Neilsen and teenaged allrounder Aaron Hardie put on 118 in 35.3 overs.

After the CA XI openers D Arcy Short and Max Bryant hit fifties in a century opening stand in quick time, Nielsen and Hardie who on Thursday claimed four wickets, including that of Kohli collected half-centuries of their own to take the total to 356/6 by stumps at the SCG, just two runs behind India.

R Ashwin was the pick of the bowlers, wheeling down 24 overs in which he picked up 1/63, while Mohammed Shami was the most prosperous with 3/67 from 18.

India’s performance was overshadowed by the teenaged batsman Prithvi Shaw suffering a nasty ankle injury that has ruled him out of the first Test next week. 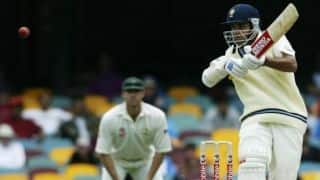