Suchita Chavan said that although Kedar Jadhav entered the field when the situation was quite intense, she was confident to see a stellar performance from her brother.

Pune: Expressing her pleasure over his brother s stellar performance in the successful opening ODI against England, the sister of Indian all-rounder Kedar Jadhav on Monday said that she was proud of the way the former stitched a 200-run partnership with skipper Virat Kohli to guide the team to a three-wicket victory. Chasing down the target against England at the Maharashtra Cricket Association (MCA) Stadium, India made a shaky start by losing openers KL Rahul (8), Shikhar Dhawan (1), recalled batsman Yuvraj (15) and MS Dhoni (6) at the team’s score of 63 only within the first 15 overs.

However, Jadhav (120 off 76 balls), who came to bat at No. 7 after India had lost four wickets at 63, batted extremely well with Kohli (122) as the duo stitched together a record 200-run partnership to ensure the hosts chase down the mammoth target of 351. Suchita Chavan said that although Jadhav entered the field when the situation was quite intense, she was confident to see a stellar performance from her brother. I am very happy with his performance. I am very proud of the way he and Virat Kohli stitched the partnership and guided the team to victory. He came to bat under extremely tough situations. Fans had almost lost their hopes after India lost four crucial wickets including of Dhoni, Yuvraj and Shikhar Dhawan. The 351-run target was looking difficult to achieve at that time. But I as an audience and as a sister was hoping to see his good performance with Virat, Suchita said.

Describing Kohli as the best and an aggressive batsman, Suchita insisted that she was glad to see her brother supporting the skipper equally well to help India chase down the target, which was also the fourth highest successful run chase in ODI history. Virat is the best batsman, finisher, as well as an aggressive batsman. I was confident that he will be able to put up good performance with Kohli. When he was nearing 100 runs, he was facing difficulty while running. Still he managed to build a 100-run partnership with Kohli and then a 200-run partnership. They were well supported by Hardik Pandya and Ravichandran Ashwin in their chase of 351-run target, she said.

ALSO READ: Morgan: Did not expect Jadhav to come out and play like that in 1st ODI

The 31-year-old batsman, who notched up his second ODI century, played in an aggressive style as he smashed the England bowlers across the ground and hit 12 boundaries and four sixes. He scored the fifth fastest century and became the fourth Indian batsman to do so, joining the likes of Kohli, Virender Sehwag and Yuvraj Singh. Jadhav, who was adjudged as the Man of the Match, in the post-match presentation ceremony had said, “It’s a great feeling that I could win a game for my country in front of my home crowd, and in front of my family. If you can make your team win, make your country proud, that’s the greatest feeling.”

“I could play this long because of captain Virat Kohli. He has done it so many times, showing how to chase big totals. I missed many chances to bat with Virat and watch him bat closely in the past, so today was the chance. It is a special day for me. Running with Virat is tough. Cramps are fine now and I am feeling better now.” The two teams will next meet on January 19 at Barabati Stadium in Cuttack. 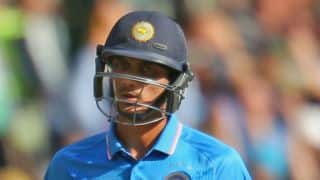