Did you know? Virat Kohli became the quickest in history to 2,000 T20I runs!

India took a 1-0 lead over England after an easy win in the first T20 International of the 3-match series, at Old Trafford, Manchester. England were placed comfortably at 95 for 1 in the 12th over before Kuldeep Yadav struck. He removed Alex Hales, Eoin Morgan, Jonny Bairstow, Joe Root, and Jos Buttler to restrict England to 159 for 8. Then KL Rahul scored a sublime unbeaten 102 to take India to a win with 10 balls to spare. Here are some highlights from the match:

1 T20I win for India on English soil now, in 4 attempts. The overall head-to-head between the two sides read 2-2.

9 batsmen have now scored 2 or more T20I hundreds, Rahul being then 9th. Rahul also became the 2nd Indian to do this, after Rohit Sharma. Colin Munro is the only cricketer with 3 T20I hundreds.

33 stumpings for MS Dhoni, the most in the world. Dhoni went past Kamran Akmal’s tally of 32. Dhoni also holds the record for most catches by a wicketkeeper (49).

101* highest score in India-England matches, by Rahul. Rahul beat the previous record of 71 held by Morgan and Rahul himself by a considerable margin.

123 2nd-highest partnership in India-England matches, between Rahul and Rohit. The record remains 136, between Gautam Gambhir and Virender Sehwag at Durban in the 2007 World T20. 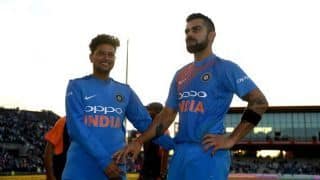 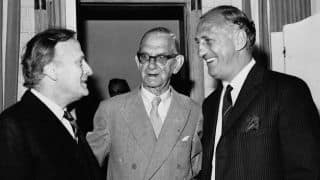