The toil for Indian bowlers continued in the morning of fifth day. To rub salt to their wound, Alastair Cook brought up his 30th Test hundred. He has now gone past Don Bradman in the list of most hundreds.

The toil for Indian bowlers continued in the morning of fifth day. To rub salt to their wound, Alastair Cook brought up his 30th Test hundred. He has now gone past Don Bradman in the list of most hundreds. He is now tied at the 11th position in the list alongside Matthew Hayden and Shivnarine Chanderpaul. This is fifth Test ton in India. In fact, he now has 13 fifty-plus scores against this team. In 18 innings that he has batted in India, the English captain has now eight scores in excess of fifty. Cook now has most hundreds in India by a visiting batsman. Before this, along with Cook, Clive Lloyd, Everton Weekes and Hashim Amla had four hundreds in India to their name. Live Cricket Scorecard: India vs England 1st Test at Rajkot

Cook played the major role in defeating India at home in 2012-13 and him getting runs at Rajkot are definitely not good signs for for the hosts. England have now extended their lead to 260. At lunch, England are 260 for 2 with Alastair Cook and Ben Stokes batting on 106 and 6 respectively. However the run rate in the session was 3.34, which casts doubts over England’s intent to press for a win. The only wickets to fall in this session was from the bowling of Amit Mishra, who was brought into the attack after over an hour and half into the day’s play.

Another gloomy day for Indian bowling

It was against England in the fourth Test at Nagpur in the 2012-13 season when India conceded a first innings lead. England had famously won the series 2-1, and in the next four years to come, India never found themselves in such a position. In this span, India had played 13 Tests at home, winning 12 of them and dominated the washed-out Test against South Africa at Bengaluru last year.

A draw looks an imminent result but England sniff a chance to win, a situation they would not be in too often in the next four Tests to follow. The England openers, who seemed to have employed the tactic of draining out the Indian bowlers rather than going for a win, showed intent after 45 minutes into first session’s play. Cook cut one wide of slip for a boundary and then played a premeditated sweep and to Virat Kohli’s agony, the top edge landed in a safe zone. Hameed, who is not known for acceleration, too had a few play and misses. He was fortunate that a thick outside edge flew right of first slip. Umesh Yadav created another chance in the same over when he got the ball to reverse but got an inside edge to his pad and the ball would have missed the leg-stump. This added to Indian frustration.

Growing up in the north with wet and slow wickets I ve had to wait for the ball and play late so I m sure that has helped me develop that sort of technique. If you look at me I m not as physically developed as other guys so I rely a lot on timing and patience and spending time at the crease, Hameed told the official website of England and Wales Cricket Board ahead of his Test debut. He adapted to the unfamiliar slow wicket like a fish would to a pond.

Zaheer Khan bowling to his cricket idol Sachin Tendulkar in a net session at MIG Cricket Club in Mumbai were some of Hameed’s early memories. Very early in his career, the youngster had made up his mind that cricket is what his career will be and trained under the guidance of his father Ismail.

In the 57th over Pujara’s brilliance almost had Hameed run out. Hameed shied away from the ball when Pujara threw it at stumps but he had his bat grounded. He has a reputation of ‘loving to bat’ and it was apparent in his approach in this innings.

He missed a Test hundred on debut as he was caught and bowled off Mishra’s bowling. His fine knock ended at 82 and crowd from his home state of Gujarat (yes, the state where he originally hails from) appreciated the knock from the English teenager.

Joe Root came in next and in bid to accelerate, lost his wicket.

Baffling tactics from England and India

Though England were solid in their approach, their innings run-rate of 3.19 is questionable. Eyeing a win, Cook and Hameed should have accelerated more. However a lot of England’s scoring was helped by baffling tactics by the Indian think-tank. While the Indian fielding continued to be dismal, Ravindra Jadeja was not brought into the bowling attack as late as 18 overs into the day. Observing the fact that leg-spin of Adil Rashid fetched him four Indian wickets, Kohli continued to under bowl the experienced Mishra. He was brought late yesterday and did get to spin the ball big creating some trouble for Hameed.

On the morning of Day Five, Mishra was brought one and half hours into the day’s play. He was the only bowler to claim wickets this morning. This raises questions over Kohli’s reluctance to use Mishra. Going back to Day One, Mishra had just bowled 10 overs in the entire day.

Going by the decision to promote Ben Stokes to No.4, England may look to declare around 10 overs in the next session. 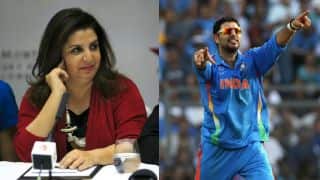