The first Test between England and India at Trent Bridge ended in a draw.

The first Test between England and India at Trent Bridge ended in a draw to leave the teams all square in their five-match series ahead of the second Test at Lord’s on Thursday.

AFP Sport examines five key points to emerge from the stalemate in Nottingham.

An utterly docile Trent Bridge pitch was heart-breaking for any bowler operating above medium pace.

Few things are so central to determining the course of a game as the state of the pitch and any more like this during the remainder of the series will have seamers on both sides begging for mercy.

2. England in a spin

Going into a Test without a specialist slow bowler is often a risky strategy.

Yet that is what England did at Trent Bridge where part-time off-spinner Moeen Ali’s 18 first-innings overs cost 97 runs, compared to India slow left-armer Ravindra Jadeja‘s 35 for 80 runs.

For Lord’s, England have called up Lancashire left-armer Simon Kerrigan whose only previous Test appearance saw him concede 53 runs in just eight wicketless overs against Australia at The Oval last year.

India, by contrast, have the option of bringing in off-spinner Ravichandran Ashwin, who has taken 104 wickets at an average of under 29 in 19 Tests.

One of cricket’s enduringly dramatic moments was restored to its rightful place at Trent Bridge where the sight of the umpire raising his finger confirmed a batsman was out, rather than being the basis for the start of a protracted, and frequently inconclusive, debate.

Indian objections mean the Decision Review System is not being used this series and, whatever your views on that, its absence certainly speeded up the game.

Prior to the match, India captain MS Dhoni had said Stuart Binny “won’t be as good as Jacques Kallis” which, while a fair point, was probably not what the all-rounder needed to hear ahead of a debut at the relatively late age of 30.

Binny was having a performance to forget in scoring one and then taking no wickets for 37 runs.

But, with England given a glimmer of hope after the tourists were 184 for six in their second innings on Sunday, he demonstrated both composure and class in an innings of 78 that secured the draw.

5. Alastair Cook has a sense of humour

Cook can come across as quite an earnest figure but in bringing himself on when the game was all but over he demonstrated a neat line in impressions of former England bowlers, including a passable Bob Willis, and took his first Test wicket into the bargain.

However, the opening batsman’s lack of runs is no laughing matter. Cook’s dismissal for five in this match meant he had gone 25 innings since compiling the last of his England record 25 Test hundreds, during which time he averages 24.

He now needs a big score as much as England, following a run of nine Tests without a win, need a victory. 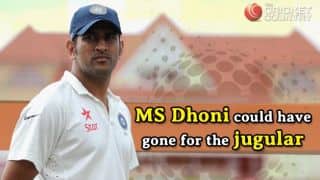