Ravichandran Ashwin figuring as the lone spinner in the Indian playing XI was in itself a surprise, and to have him bowl as early as the seventh over could not have gone better for India in the first session of day one of the 1st Test between India and England at Edgbaston on Wednesday.

Ashwin made a telling statement, after India were asked to bowl first, in his second over when he tossed one on middle stump which had Alastair Cook pushing forward, but the offbreak just turned enough to go past Cook s bat to rattle the stumps.

Cook departed for 13 before fellow opener Keaton Jennings and skipper Joe Root played out the first session without much trouble thereon, taking England s total to 83/1 at lunch on day one.

Ishant Sharma and Umesh Yadav, India s new ball bowlers, started their spells with promise but could not maintain the consistency. Ishant, more of a back-of-length bowler, bowled it wide while bowling his preferred line and when he tried to bowl full, that invariably drifted down the leg. Both Jennings and Root picked up easy boundaries early on.

Ishant did manage to get one spot on with his line and length that had Jennings squared up and edging one to third slip. However, Ajinkya Rahane, India s best slip fielder – in an error of judgment – threw himself to his right in a bid to hold on to a dying ball, but failed. Virat Kohli at third slip could only see the catch dropped which would have ended straight in his hands.

Ashwin though was sensational in his first spell of 7-2-13-1 as he managed to turn the ball and on occasion with bounce to surprise Jennings and Root. His control over the new ball was commendable. Mohammed Shami, who came in as the second change bowler bowled a terrific first over shaping the ball into the right-hander, but Root was up to the task.

Jennings played a chancy innings, but the important thing is he is still in the middle. 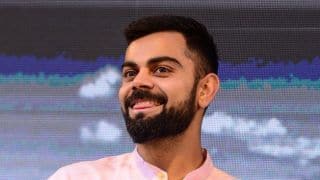 There was perception that I'd be a flash in the pan: Virat Kohli