India picked the remaining four England wickets in the second session, but at the expense of 93 runs, setting themselves a target of 194 runs to win the first India vs England Test at Edgbaston on Friday.

India picked up the remaining four England wickets in the second session on Friday, but at the expense of 93 runs, to set themselves a target of 194 to win the first India vs England Test at Edgbaston.

Ishant Sharma finished with five for 51, his eighth five-wicket haul in 83 Tests, with Umesh Yadav adding two scalps in the session. The 20-year-old Sam Curran, in his second Test, played a valiant knock of 63 and was the last man out as England s second innings came to a close on 180.

Ishant, with the second ball of the post-lunch session, had sent back England s last recognised batsman Jos Buttler with a back-of-length delivery as England sunk further to 87 for six with their lead at only 100.

India would have loved to skittled the England tail, but Adil Rashid, boasting a first-Ccass batting average of 33.21 including 10 centuries, and Curran resisted, adding 48 for the eighth wicket to arrest India s momentum. The duo counter-attacked, and got the runs in just 14.4 overs.

Rashid s unorthodox approach unsettled Ishant s line while Curran threw his bat hard at anything that was a fraction wide. Play was halted due to bad light for a while but the break worked in India s favour as Umesh got Rashid with one that nipped back in. Rashid was earlier dropped off Umesh by Shikhar Dhawan at first slip.

Curran s scoring rate escalated with a six and a four off R Ashwin, and he followed it up with another stunning six over extra cover to bring up his maiden Test fifty off 54 balls.

All the while, Stuart Broad played second fiddle to Curran who continued to grow in confidence, taking England s lead to 193 before he edged Umesh to Dinesh Karthik.

The target may seem gettable but the average fourth-innings total at Edgbaston over the years has been 156, and 150-plus targets have only been achieved thrice at this ground.

Earlier in the morning, Ashwin started proceedings and had Keaton Jennings edging one to slip. He next got Joe Root, who pushed a back-of-a-length delivery towards leg slip where KL Rahul took a very sharp catch.

Mohammed Shami, who started the morning with Ashwin, bowled seven overs without extracting much, but the introduction of Ishant left England reeling. Root’s departure had already dented the hosts and when Dawid Malan, still smarting from dropping Virat Kohli twice a day before, was squared up and edged to gully, India had taken big strides into the middle order.

What transpired next was stunning, as Ishant added Jonny Bairstow and Ben Stokes to make it three wickets in one over, either side of lunch. Bairstow succumbed when Ishant got one to straighten off a good length to give Shikhar Dhawan a catch in the slips, and one ball later Stokes was duped by an away-swinger that took the edge and went straight into the hands of Kohli at slip. 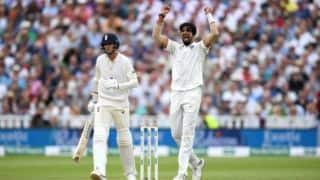 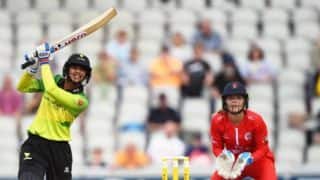