ECB said steps were already being taken to address the "uncharacteristic" nature of the pitch.

English cricket authorities faced the prospect of a $15,000 fine after the docile Trent Bridge pitch on which England and India played out a draw in last week’s first Test was rated as “poor” by match referee David Boon.

Former Australia batsman Boon’s verdict, announced by the International Cricket Council (ICC) on Saturday, is the first time a Test pitch in England has been labelled as “poor” by a match referee.

Boon oversaw proceedings at Trent Bridge where, almost from the start of the match, there were complaints about an unusually dry and lifeless surface which denied the faster bowlers their due reward. Indeed so severe was the criticism, that groundsman Steve Birks took the unusual step of issuing a public apology.

The ICC said Boon’s report has been forwarded to the England and Wales Cricket Board, which now has 14 days to respond.
When that response is received, the ICC’s general manager of cricket and chief match referee Ranjan Madugalle will consider all the available evidence to decide whether they agree with Boon’s assessment and, if so, what penalty, if any, should be imposed.

The first time a pitch is rated as “poor” by the ICC, a warning and or fine not exceeding $15,000 (£8,779) can be imposed, together with a directive for “appropriate corrective action”. However, such a judgement would not see a ground stripped of its right to stage international matches.

In response to the ICC’s statement, the England and Wales Cricket Board (ECB) said steps were already being taken to address the “uncharacteristic” nature of the pitch.

The ECB said they had “noted” Boon’s decision to rate the pitch as ‘poor’ adding: “ECB and Nottinghamshire are already working closely to address the uncharacteristic nature of the pitch for the Test match and ECB pitch inspector Chris Wood and Nottinghamshire groundsman Steve Birks are planning the corrective action required under the Clause 4.1 of the ICC’s pitch monitoring process.”
Prior to the match, exiled England batsman Kevin Pietersen argued that modern drainage systems had turned English Test pitches into “sandpits”.

However, the ECB’s statement said: “It has already been established that the drainage system at Trent Bridge played no part in the unexpected issues that arose around the preparation and performance of the Test Match wicket.”

During the first Test, India made 457 and 391 for nine declared, while England complied 596 in its lone innings. Both teams saw their last-wicket pairs in Nottingham involved in century stands, with England’s Joe Root and James Anderson putting on a Test record 10th-wicket partnership of 198.

After the first day, with India 259 for four, Birks said: “We wanted to produce a pitch with pace, bounce and carry which hasn’t happened unfortunately.”

With the five Tests in this series crammed into six weeks, Broad said: “It’s a lot of overs early doors but that’s sort of been due to the wickets we’ve been given.

“When nicks aren’t carrying, you’re not going to bowl teams out overly quickly. Hopefully, we’ll bowl on some more favourable wickets coming our way.  I’ve never seen a wicket like this (at Trent Bridge).”

For the ongoing second Test at Lord’s in London, it was noticeable the match was being played on a significantly greener and livelier pitch than the one at Trent Bridge.
Complete coverage of India’s tour of England 2014 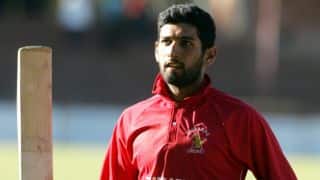 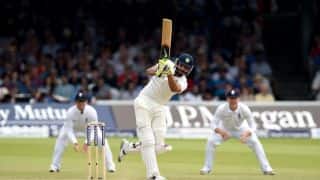