India are already trailing England by more than 400 runs and will have to fight hard to stay in the hunt in the first Test of the five-Test series.

In the second over of Day Three, England struck early as India‘s opener, Gautam Gambhir, went for 29 off Stuart Broad‘s first over. India did all the hardwork in the last session of Day Two after bundling out England for 537 as they went into stumps at 63 for no loss. Nonetheless, England have got the early breakthrough they would have been searching for as India will have to start from scratch to prevent the follow-on. Broad bowled right at Gambhir’s pads as the left-hander tried to flick it to the leg side but missed the length completely as his bat stuck onto the pads and hit the stumps. Live Cricket Scorecard: India vs England 1st Test at Rajkot

Both the openers, Gambhir along with Murali Vijay, had a brief discussion whether to go for a review or not but decided against it. Had they taken a review, they would have lost one for India as it has clearly hitting the stumps. Gambhir’s change in stance bore good results yesterday but since it makes him move across, more than compared to his older stance, it went against him today as he went after a good start. Live Cricket Updates, India vs England,1st Test, Rajkot

India are in a spot of bother as regular wickets will dent their run-flow. They are already trailing England by more than 400 runs and will have to fight hard to stay in the hunt in the first Test of the five-Test series. England posted 537 in their first innings with three centuries in form of Joe Root, Moeen Ali, Ben Stokes. 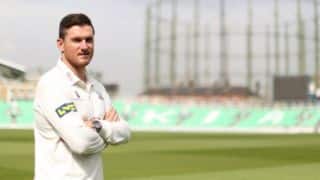