tarting their innings post tea, Indian openers ended Day Two by keeping their wickets intact. While Gambhir was unbeaten on 26, Vijay went back unconquered on 24.

After a tough day in office, at least for the first two sessions, which were completely dominated by the tourists, India started their reply on a solid note with the openers Gautam Gambhir and Murali Vijay leading the charge. At stumps on Day Two, India were 63 without loss, trailing England by 474 runs. Gambhir, who earned his chance with some brilliant performances in domestic cricket in addition to KL Rahul s and Shikhar Dhawan s injuries, continued from where he left in Indore during the third Test against New Zealand. His partner Vijay too looked solid during his stay in the middle. The two of them gave India just the kind of start that was required chasing England s mammoth 537. Full Cricket Scorecard: India vs England 1st Test at Rajkot.

Starting their innings post tea, Indian openers ended Day Two by keeping their wickets intact. While Gambhir was unbeaten on 26, Vijay went back unconquered on 24. Both the batsmen started on a positive note and did not give any chance to the English bowlers. Skipper Alastair Cook, who had beefed up is bowling department with as many as six bowlers, deployed five bowlers today, but did not get any success. All the bowlers barring Stokes, who did not come out to field, had a shot at Indian batting but the desired results simply did not come.

Gambhir was particularly impressive, with his new changed stance, which prevents his front foot from going too far across; a problem which was causing his dismissals outside the off stump. He has been particularly playing the short ball well with his new improved stance, and scoring runs in all the matches he has played in recent times. He was exceptional in the Duleep Trophy and he translated the same form into international cricket. All eyes will be on him on Day Three. If he gets a big score, not only will it help the team’s cause, but also him as an individual, for he has some serious competition for the slot.

Earlier, all-rounders Ben Stokes and Moeen Ali both hit centuries on Day Two as England posted an imposing 537 all out. Stokes hit 13 fours and two sixes in his 128-run knock while Ali, who had been unbeaten on 99 overnight, made 117 as England put on board the biggest total by a visiting team in India for nearly five years. Joe Root (124) had notched up a century on the opening day to lay a solid foundation for the tourists at Rajkot’s Saurashtra Cricket Association (SCA) ground before the England middle order piled on the agony.

India did pick up a few wickets in quick succession in the period immediately after lunch, but Stokes held on to his ground firmly to help England post their third highest total on Indian soil, after they elected to bat first. Interestingly, the southpaw had three ducks in three previous Test innings against India and it was the first time he opened account. And in what way! He chose most apt of the occasions to get to his maiden ton against India by helping his side gain the upper hand in the first Test.

Stokes and other English batsmen made the Indian bowlers toil hard. Jonny Bairstow also added quickfire 46 off 57 balls while Zafar Ansari scored 32 batting at No.10. Ace spinner Ravichandran Ashwin ended up conceding 167 runs while taking just two wickets. Ravindra Jadeja (3/86) was the pick of the bowlers with Mohammed Shami (2/65) and Umesh Yadav (2/112)

Indian fielders continued with their butterfingers effort even on Day Two. After dropping four catches on the first day, Day Two saw Indians on a catch-dropping spree once again. There was a new addition to the list as Stokes was dropped twice in his sixties by wicketkeeper Wriddhiman Saha with Yadav being the unlucky bowler on both occasions.

Stokes chipped in before Shami broke their 62-run stand with the wicket of Ali who saw his off-stump cartwheel away in spectacular fashion after misjudging the line and not playing a shot. Bairstow also looked in ominous form, lofting leg-spinner Amit Mishra over the long-on boundary for a six.But he lost his wicket when he was caught by Saha off Shami, who looked the pick of the bowlers. England’s total was the highest by a visiting team in India since the West Indies made 590 at Mumbai in November 2011.

The match is evenly poised for now. India will look to consolidate their position on Day Three, with all 10 of their wickets intact. But they will also be wary of England, and expect them to come back hard tomorrow. England, with six bowlers at their disposal, will look to get some early wickets on Day Three and keep their hold on the match. India, though owning that last session on Day Two, still have their task cut out and will have to work hard to get their runs, even if the pitch has runs hidden in it. 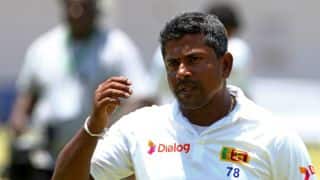