If India just managed to pull back the things towards the end of the first session, the next two sessions completely belonged to England, with Root and Moeen dominating the proceedings.

Visitors England ended Day One of the first Test against India on a healthy note on a total of 4 for 311 at stumps. Their vice captain Joe Root scored a crucial hundred while Mr. Dependable Moeen Ali remained unbeaten on 99 and bailed the team out of early blues, as at lunch England were reeling at 3 for 102. The duo added 179 runs for the fourth wicket and negated the threat of Indian spinners, playing them comfortably and handing over their side massive advantage ahead of Day Two. For India, Ravichandran Ashwin picked up two wickets while Ravindra Jadeja and Umesh Yadav got a wicket each. Leg-spinner Amit Mishra and Mohammed Shami went wicketless. At stumps on Day One, Moeen 99 and Stokes 19 were at the crease. Full Cricket Scorecard: India vs England 1st Test at Rajkot.

The match started on a rather unusual note, as Indian captain Virat Kohli lost the toss. Kohli, who has got the call of the coin right on most occasions, got it wrong this time around and had to bowl first on a pitch which was expected to get better for batting as the time progressed. England tried out yet another new opening combination, as their skipper Alastair Cook walked out to bat with a debutant; a teenaged-partner Haseeb Hameed.

After trying Sam Robson, Adam Lyth, Jonathan Trott, Root, Alex Hales and Ben Duckett as Cook s opening partners in recent times, this was England s latest punt. And by the look of it, it did not turn out to be a bad one. The young Lancashire batsman Hameed, who had scored truckload of runs in the current English County season, started on a positive note by adding 47 runs with Cook for the first wicket.

However, the duo was well supported by Indian fielders, who seemed to have turned up with butterfingers, as not one or two, three catches were put down by them in the first half-an-hour of the day s play. It all started with the very first over being bowled by Shami, when one of India s best fielders Ajinkya Rahane dropped skipper Cook in gully. In the very next over, Cook got another reprieve when his opposite number Kohli dropped him in the slip off Umesh s bowling.

Hameed s turn came pretty soon too, as he was put down in the slip by Murali Vijay. The English openers however could not make much of it. Spin was introduced in the 10th over of the day and India soon got the desired result. Cook, who shuffled across the stumps to play a turning Ravindra Jadeja-delivery, got hit on his right pad and was adjudged plumb lbw by the umpire. The England captain took a bad advice from his partner Hameed, who suggested him not to review the decision. Had he reviewed it, Cook would have survived as the ball was missing leg.

Cook s dismissal brought his deputy Root to the crease. The Yorkshire batsman, who has been the leading run-scorer across formats for the year 2016, looked comfortable from the beginning. He added 29 for the second wicket with Hameed, before the debutant was trapped in front of the stumps by Ashwin. Hameed committed his second mistake since morning by deciding to review his decision and wasting a review. The tv umpire withheld the field umpire s call and England were reduced to 2 for 76.

Young Ben Duckett, who made his debut in Bangladesh as an opener, was moved down the order to accommodate Hameed. He started off on a positive note, hitting Ashwin for three boundaries in an over. But his adventure ride was cut short by the tall off-spinner, who bowled a slower delivery than the usual one and produced an outside edge which was brilliantly pouched by Rahane in the slip. The fielder did redeem himself after an awful effort in the morning, as Duckett was given out after tv umpire s intervention just at the stroke of lunch. England went inside with the score reading 3 for 102.

If India just managed to pull back the things towards the end of the first session, the next session completely belonged to England. Root and Moeen batted brilliantly to take England to 3 for 209. In the process, the prodigal talent brought up his 24th half-century. He was well supported by Moeen, as the two showed terrific defence against the Indian spinners. They blocked and sweeped the spinners well and on occasions, played the big shots too.

Root brought up his 11th Test hundred in the final session of the day s play. He was eventually dismissed by Umesh, who caught him off his own bowling. Root went back after scoring 124 off just 180 balls, not before some commotion in the middle, as Umesh had almost spilled the ball of his hands in excitement while taking the return catch. The tv umpire s services were sought and he withheld the on-field umpire s decision. All-rounder Ben Stokes replaced Root in the middle and ended the day with unbeaten 19, adding 30 with Moeen for the fifth wicket. 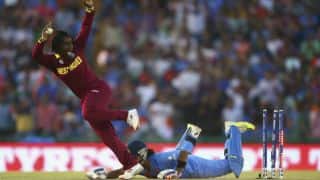 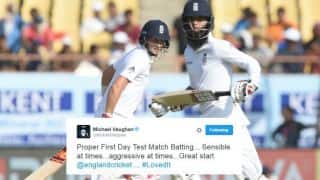