Jonny Bairstow and Ben Stokes added 99 for the sixth wicket before Mohammed Shami got India a wicket.

England‘s wicketkeeper-batsman, Jonny Bairstow, was dismissed for 46 off 57 balls off Mohammed Shami’s delivery as Wriddhiman Saha finally caught him after dropping two already off Ben Stokes’ twice. The second day’s play has again gone out of India‘s favour as England have raced past 400-run mark with centuries from Moeen Ali, Joe Root and a fifty from Stokes. Bairstow also looked set as Indians kept dropping sitters in the field but was unlucky to still not convert his score into a big one as he departed edging one wide delivery off Shami to give India their sixth breakthrough. Live Cricket Scorecard: India vs England 1st Test at Rajkot

England went to lunch at exactly 450 for 6 by losing only two wickets in form of Moeen and Bairstow. Bairstow was dropped or given a reprieve again as Virat Kohli and Ravindra Jadeja dropped chances courtesy reacting late. Indians have struggled a lot in the field ever since they lost the toss and came into field. If Day one was all about sloppy fielding and Joe Root’s century, Day Two belonged to Moeen Ali and Stokes, who is also nearing a hundred. Live Cricket Updates, India vs England, 1st Test, Rajkot

Amidst the run-scoring, Bairstow also looked good as he blasted a few maximums off Amit Mishra and played according to the merit of the ball. He would still have liked to remain unbeaten till lunch and take England past 500 but thanks to Stokes’ presence, England still have a chance to get past 500, or even 550. Bairstow and Stokes added 99 for the sixth wicket before Shami got India a wicket. 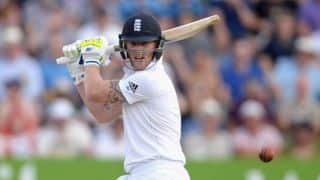