England beat India by 31 runs the first Test at Edgbaston on Saturday to take a 1-0 lead in a five-match series. India, set 194 for victory, were dismissed for 162 before lunch on the fourth morning. England all-rounder Ben Stokes, who could miss next week’s second Test at Lord’s because of a court trial on a charge of affray starting Monday, took two wickets in an over including the prize scalp of India captain Virat Kohli for 51. Star batsman Kohli had made 149 — his maiden Test century in England — during India’s first innings at Edgbaston. Stokes ended the match when he had Hardik Pandya (31) caught at first slip for an innings return of four for 40 in 14.2 overs.

Stay tuned with CricketCountry for all the live scores, live updates, live reports plus news, analysis and features here.

Quotes: There is no hiding from this loss: Virat Kohli

Quotes: We can get Virat Kohli out, no one is invincible in cricket: James Anderson

Quotes: Bowling a lot of overs for Sussex helped me take 5/51: Ishant Sharma

News: R Ashwin first Indian to 200 wickets under one captain

Video: Records broken by Kohli during his 22nd Test century

Feature: Who is Sam Curran?

News: Jos Buttler in hospital for X-ray on injured finger

Stats: Milestones set by Virat Kohli during his 149-run knock

News: Not trying variations is working well for Ashwin in England, feels Harbhajan

Quotes: I think it adds to the spectacle of Test cricket: Joe Root on Virat Kohli send-off

Quotes: Not in frame of mind to prove myself in any country, says Virat Kohli

Quotes: India are the only side capable of beating England in England, claims Ravindra Jadeja

Feature: Five of the best spells by Indian bowlers in England 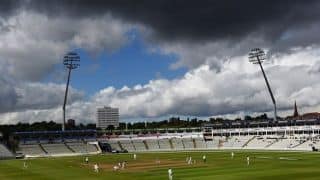 India vs England, 1st Test live streaming: When, where to follow, how to watch online