Mooen Ali was unbeaten on 99 at stumps on Day One of the first Test at Rajkot.

In the first session of Day Two of the opening Test of the five-match series between India and England, Moeen Ali got a single to complete his fourth Test century, whereas his first in Asia and versus India. Moeen, who was promoted up the order on Day One, looked in sublime touch from the word go. He was in full control of his innings and did not give any chance to the struggling Indian bowlers. He stitched a huge 179-run stand with other centurion, Joe Root, and bailed England out of troubled waters when they were in a tricky situation of 102 for 3. England will hope for more runs from his blade if they have to reach close to 500. Meanwhile, Moeen also became the second overseas player since 2013 to register three figures on Indian soil. Live Cricket Scorecard: India vs England 1st Test at Rajkot

Root and Moeen provided England a strong foundation with their steady partnership. They were in full control, ran hard between the wickets and negated the spin with ease while hammered the pacers all over the park. If Root departed before end of stumps on Day One, Moeen selflessly held his end and did not get bothered by the fact that he was in nineties and might as well have taken charge against the tiring Indian bowling line-up. He knows if he stays for long in the first session of Day Two, a mammoth total will be possible for the visitors.

For India, it was a forgettable Day One as they struggled in the field throughout the day. Dropped catches were not the only blip, as the fielders were sloppy which resulted in a few easy boundaries for the English side. India were also tad unlucky in the morning during the toss, when Virat Kohli flipped the coin and the outcome went in England s favour. England captain Alastair Cook, who was dismissed for 21, went on to bat first and Haseeb Hameed, the 19-year-old right-handed opener made an impressive start before perishing for 31.

Ashwin bowled as many as 31 overs in the day, and could manage only 2 wickets for 108 runs. Ravindra Jadeja was measly with the figures of 21-2-59-1. Amit Mishra bowled 10 wicketless overs for 42 runs. The Indians will have to lift their dying spirit and try to remain in the game before England pile on more miseries at them. 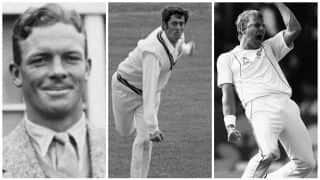