Ravichandran Ashwin stitched a 64-run stand with wicketkeeper-batsman, Wriddhiman Saha, to stage India's comeback but lost his partner before getting to his personal milestone.

India‘s premier off-spinner, Ravichandran Ashwin, came good with the bat after India lost Virat Kohli and Ajinkya Rahane early on Day Four in the first Test versus England. India started the day at 319 for 4 but crumbled early on as both Kohli and Rahane left the crease early. While Rahane misjudged the length of the ball, Kohli got out hit wicket. Ever since the duo departed, Ashwin took over and looked completely set as he timed everything from the middle of the blade and notched up his seventh Test half-century after lunch. Live Cricket Scorecard: India vs England 1st Test at Rajkot

Ashwin stitched a 64-run stand with wicketkeeper-batsman, Wriddhiman Saha, to stage India’s comeback but lost his partner before getting to his personal milestone. He will again have to regroup with the tail-enders as local boy, Ravindra Jadeja also got out after adding on board. Live Cricket Updates, India vs England, 1st Test, Rajkot

So far, Ashwin has looked really patient with just two fours but still rotated the strike at regular intervals. He holds forte for India if they have to get anywhere close to England’s score. After Cheteshwar Pujara and Murali Vijay’s twin centuries, others got to starts but could not convert it into anything significant but Ashwin will like to get runs under his belt and bail India out of stiff position. 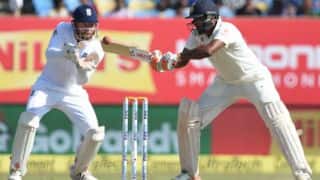