The second session of the fourth day in the first Test between India and England belonged to Ravichandran Ashwin. The Indian resistance from their lower order harboured the side to 488.

The second session of the fourth day in the first Test between India and England belonged to Ravichandran Ashwin. The Indian resistance from their lower order harboured the side to 488. Ashwin, who did not have a great time with the ball, stroked to his seventh Test fifty as his innings ended at 70. Leg-spinner Adil Rashid claimed four wickets as England managed a 49-run lead. India were at a precarious position in the first session when they lost the important wickets of Ajinkya Rahane and skipper Virat Kohli in the first hour of the day. Thereon, Ashwin and wicketkeeper Wriddhiman Saha added 64. Live Cricket Scorecard: India vs England 1st Test at Rajkot

Moeen Ali began the proceedings post lunch, the session, which is usually the best for batting in subcontinent. It seemed the players were is doze mode post lunch but Chris Woakes gave Saha a wake up call. On Day Three, Woakes in the first session, struck Cheteshwar Pujara thrice on the helmet and we saw a repeat, which looked more nasty. Similar to Pujara, Saha ducked to the short delivery that was angled in. It shook him and he took a while for him get back to normalcy. Saha, who has been hailed earlier for his technique against short balls, moved away his eyes from the ball this time.

In the 144th over, Saha stepped out to Moeen and hoisted him straight for a boundary but the very next ball, trying to cut it fine, got a nick to Jonny Bairstow’s gloves. It was not the need of the hour as India were still over hundred runs behind. He will be disappointed to have not made use of the slice of luck he received early when Jonny Bairstow dropped a chance.

The wicket did not have an impact on Ashwin’s vigil. He continued to build on the good work pre-lunch. He was joined by spin-twin and local star Ravindra Jadeja, who has three First-Class triple hundreds to his name, his third one came at this venue against Railways when England were touring India in 2012-13. Jadeja averages over 110 in First-Class cricket in this ground, his best being 331. He also has an unbeaten 232 at this venue.

While Ashwin and Jadeja continued their resilience, the scoring rate took a hit. Their partnership till the drinks break in the second session was of 11 from seven overs. However the pleasing bit for them was to see the turn and bounce on offer. The odd deliveries bounced and spun sharply.

After the drinks break, Jadeja broke the shackles when he hoisted Rashid straight for another maximum. The leg-spinner struck in his next over and this time the turn and bounce beat the southpaw. He looks to fend it as the ball takes his glove and bit of the handle and lobs to the short-leg fielder. Rashid by now has claimed the key wickets of centurion Murali Vijay, star batsman Kohli and local boy Jadeja.

Umesh Yadav came in and slogged on the leg-side to get a boundary. His stay at the wicket was a couple of attempts and misses, he eventually perished anticipating a googly and going for another slog, only to get an inside edge to the short cover fielder Ben Stokes.

Ashwin could have been left stranded at 49 had England skipper Alastair Cook held on to the regulation catch of Mohammed Shami in the first slip. The drop denied Stuart Broad his second wicket on his 100th Test.

Ashwin finally got his fifty in that over and upped the tempo. He tried a paddle sweep that found Bairstow’s helmet and then played an attractive pull and a crafty late cut, both earned boundaries very important runs for India. However, the highlight was the shot he played against Broad. It was a short ball that was angled in, Ashwin leaned and guided it over Bairstow towards third man for another boundary.

In the following over, Ashwin slapped one from Rashid off back foot for a boundary and managed the routine single off the fifth ball. He showed great sense as he prevented Shami from taking strike. However Shami got a ball and he deposited behind the deep midwicket for a humongous six.

Ashwin finally fell to Moeen at 70 at the stroke of tea when he tried to clear the deep midwicket boundary but found Zafar Ansari near the ropes. Ashwin and Shami added vital 29 runs for the last wicket.

Earlier in the day, Rahane fell to a poor shot-selection when he misjudged the length from Zafar Ansari and lost his bails. Kohli looking to play a pull off Adil Rashid went deep back in the crease and stepped on to the stumps. Kohli’s resistance ended at 40. He became the 20th Indian to get out hit-wicket and the first Indian batsman after VVS Laxman, who got out in similar manner in 2002. 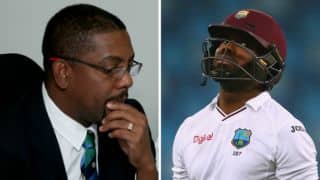