The first Test between India and England at Rajkot ended in a draw after a gruelling five-day contest that saw bat prevailing over ball. It was an intense final session that saw the India in deep waters with Indian captain Virat Kohli fighting it out in the middle in bid to ensure his team do not go one down. The ball spun in the final session and one from Zafar Ansari hit the crack and took off with Kohli joking with the umpire, ‘if that was one for the over’. India lost four wickets in the session and there were plenty of anxious moments in the final session as England spinners led by Adil Rashid dug inroads in the middle-order. The Test ended with India at 172 for 6 from 52.3 overs. Indian skipper Virat Kohli, who was hit-wicket for 40 in the first innings, ended with unbeaten 49. Full Cricket Scorecard: India vs England 1st Test at Rajkot

In the second session of the fifth day, England set India a target of 310 runs from 49 overs. Though England virtually set up a ODI-like scenario, chasing over six an over in Test cricket is too steep a challenge, considering their are no Powerplays or restrictions on wide ball. India, who looked in a comfortable position till the tea break, lost the wickets of Murali Vijay and Ajinkya Rahane immediately after the break.

Kohli began the session with a boundary, an uppish drive off Rashid. His intent was clear as he slapped another one straight past Rashid for another boundary. Vijay, who looked good till 31, was once again caught bat-pad off Rashid. Hameed, who had had a dream debut, made no mistake. An over later, Rahane once again departed to an awful stroke where he misjudged the length from Moeen Ali. He was on back foot, had no room and it clipped his pad on its way to stumps.

Ashwin batted close to an hour with Kohli and it seemed that the experienced duo were harbouring India to safety. Moeen was finding Ashwin’s pads too often and challenged one unsuccessfully. With an hour left in the game, Alastair Cook surprisingly gave the ball to part-timer Root with Ansari bowling from the other end. Ashwin, who had looked comfortable, added 47 with Kohli before giving it away. He played a loose shot off Ansari and found Root at extra-cover.

While Kohli continued to provide resistance from one end, Wriddhiman Saha came out with an unwanted aggressive intent. India’s wicketkeeper had struck two attractive boundaries before a mishit off Rashid landed straight to the bowler’s hands.

Much to the crowd’s nerves yet glee, the local boy Ravindra Jadeja walked out to bat. The crowd, who stayed away for the four days, were noisy and cheered for India. England’s substitute fielders were hovering around the ball boys and sending the boundary balls back in quickly so that England can bowl more overs. Kohli was not happy with this ploy.

When defence was the order of the day, Jadeja walked out and played a cameo as he batted for over half an hour, ending with 32 from 33 balls. Kohli too did not hold back. If there were scoring opportunities, he went after the bowling.

In hindsight, England would be ruing the fact that they declared late which prevented them enough time to take the remaining four Indian wickets. It makes little sense to give your opposition a target with a required run-rate well over six an over. In addition, England missed out on an opportunity to score at a brisk pace on the fifth morning. However what comes as a surprise is that England spinners outshone their Indian counterparts, who possess a much illustrious CV.

Bowlers were at the receiving end throughout the Test but England will take heart from the fact that leg-spinner Adil Rashid was the most impressive bowler from the lot. He claimed a four-for in the first innings, accounting for the wickets of Vijay, Kohli, Wriddhiman Saha and Umesh Yadav. Even in the second innings, he claimed the crucial scalps of the first innings centurions Vijay and Pujara in second innings.

England started very well in their second innings and their opening stand was of 180. While the 19-year-old Haseeb Hameed became England’s third youngest player to score a fifty, Cook brought up his 30th Test hundred. In doing so, he surpassed Don Bradman’s tally of 29 and in process became the only visiting cricketer to notch up five Test hundreds in India. He also became the fourth batsman after Clive Lloyd, Gordon Greenidge and Matthew Hayden to bring up 1,000 Test runs in India.

Hameed’s family, who hail from Gujarat, were at the state, watching their ward make it big in Rajkot. Hameed, who practices a lot on slow wickets, mastered Indian spin bowlers and was not daunted by the reputation of Ashwin and Ravindra Jadeja.

England who needed quick runs on the final morning began watchfully but as the session progressed, Cook showed intent to step up. Baffling from the Indian captain Kohli, who brought in Mishra very late once again in this Test. Mishra was brought in an hour and half into the fifth day’s play. He immediately responded with Hameed’s wicket. Hameed departed for 82 after hitting one straight back to the bowler. In bid for quick runs, Joe Root too was dismissed by Mishra for 4.

Ben Stokes was promoted at No.4, and he responded with a run-a-ball 29 not out. Cook’s fall at 130 was followed by the England declaration. World No.1 Test bowler Ashwin had a tough Test with the ball. Some respite for the Indian as he got the wicket of Cook.

England clearly had the upper hand in the Test with India playing the catching up game and managed to escape with a draw. The next Test begins at Visakhapatnam on Thursday, November 17. Moeen Ali was rightly awarded the Man of the Match for his hundred and three wickets. The track will have now turn in comparison and England will enter the field with more confidence. 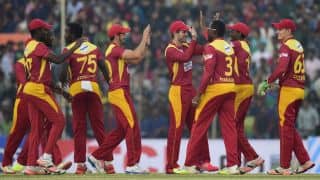