Some sloppy work by Indian fielders meant England threatened to walk way with the first session s honours on Day 1. However, spinners pulled back things to give hosts the edge.

Team India appeared rusty in the first session of the first Test against England that stated here in Rajkot. Some sloppy work by their fielders resulted in England walking way with the session s honours. At lunch, they had reached to a total of 3 for 102 losing captain Alastair Cook, whom India got with some luck assisting them, the other opener Haseeb Hameed, and young Ben Duckett. Cook, who shuffled across the stumps to play a turning Ravindra Jadeja-delivery, was adjudged plumb lbw by the umpire. However, the ball seemed to have missing the leg stump and Cook erred in not reviewing it. He perhaps went with the advice of his young opening partner Hameed, who felt he was out. Full Cricket Scorecard: India vs England 1st Test at Rajkot.

Hameed might have erred there, and that was not the only mistake the young debutant committed since morning. We will come to the second mistake later, but apart from that, Hameed put no foot wrong till the time he was dismissed by Ravichandran Ashwin. His innings though was far from being flawless, courtesy Indian fielders. It seemed as if best of the fielders from the host side turned up with butterfingers, as not one or two, three catches were put down by them in the first half-an-hour. It all started with the very first over being bowled by Mohammed Shami, when one of India s best fielders Ajinkya Rahane dropped skipper Cook.

Shami bowled a back of a length delivery, which was played by Cook towards the gully region. Rahane did make an effort by diving and getting both his hands to the ball but could not quite hold on to it. In the very next over, Cook survived once again, when an Umesh Yadav delivery he played towards the slip region went past his opposite number Virat Kohli, who dropped a relatively easy chance. If Cook had some luck going by his side, Hameed was not far behind in this regard, as he too earned a reprieve very soon.

He was dropped by Murali Vijay in the slips, and once again the bowler at receiving end was Umesh. However, by then, the youngster had eased up a bit by hitting three boundaries. He had first hit Shami for consecutive fours in the third over of the day and then hit Umesh for a boundary in the same over before getting dropped. Shami and Umesh continued to get the edges but success eluded them. By the 10th over, England had reached to a score of 35 without loss, possibly their best start in the subcontinent with a new opening pair.

Desperately in search of a wicket, Kohli turned to his main weapons Ravichandran Ashwin and Jadeja. The off-spinner was first introduced in the 11th over and Jadeja followed him from the other end. First success soon followed as Cook was dismissed by Jadeja. English skipper s luck finally ran out as he perhaps forgot that the DRS was in use for this series. He decided not to review an lbw decision which in all likelihood would have been overturned by the tv umpire.

After the 47-run opening stand was broken, skipper Cook was replaced by England batting s lynchpin Joe Root. 2016 s top run-scorer across formats started on a confident note. Hameed on the other hand continued to play steadily. The two batsmen added 29 runs for the second wicket before Ashwin trapped Hammed in front of the stumps from bowling around the wicket. The umpire had no hesitation as he raised his finger. But Hameed thought otherwise and decided to review it. This was the second mistake he committed as he wasted a review. There was no edge involved and Ashwin s front foot was absolutely fine as England lost their second wicket.

Hameed scored 31, not a flawless knock by any stretch of imagination, but certainly a one which would do his confidence a world of good. He was replaced by another youngster Ben Duckett, who made his debut in Bangladesh last month and was moved down to No.4 to accommodate Hameed in the playing XI. Both Duckett and Root took England to lunch without any further damage. The duo survived Kohli s last minute ploy of bringing the leg-spinner Amit Mishra into the attack. The attacking bowler was introduced just at the stroke of lunch and both the batsmen did well to survive him, but Duckett’s dismissal happened just at the stroke of lunch, when he fell to Ashwin.

The young southpaw tried to defend an Ashwin delivery which was bowled at a slower than usual pace. He ended up edging the ball to Rahane at slip, who took a stunning catch to make up for the earlier fumble. Duckett managed 13 with three fours and left England and his partner Root high and dry at lunch, with score reading 102 for 3.

Earlier in the day, Indian captain Kohli lost a rare toss and had to field first. Given the pitch on offer, which will become dry and better to bat on as the time progresses, he would have loved to bat too. England went in with youngster Hameed, who became the sixth youngest debutant in England’s Test history. He was handed over his Test cap by former captain and opener Mike Atherton. Cook also decided to play young Zafar Ansari ahead of the veteran Gareth Batty. India, on the other hand, decided against handing debuts to Karun Nair and Hardik Pandya and went with a five-bowler combination. 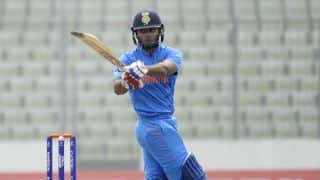