Moeen Ali will like to carry on in the same manner after Joe Root and pile on more runs before stumps on Day One.

In the last session of Day One of the first Test between India and England, Umesh Yadav dismissed Joe Root for 124 off 180 balls to give the hosts their fourth breakthrough. Earlier in the day, England won the toss and came to bat with Test skipper Alastair Cook and Haseeb Hameed giving a good start to the visitors. Indians dropped three catches to give England a good start but spinners broke the shackles and gave India three wickets by lunch. Since lunch, India struggled as Root and Moeen Ali added 179 runs for the fourth wicket with Root getting to his first century in Asia. Yadav finally gave India a key wicket in form of Root who drove the ball but handed a good sharp catch to Yadav. Live Cricket Scorecard: India vs England 1st Test at Rajkot

While Root played positive cricket, he was well complimented by Moeen who was calculative in his approach. The duo added miseries on Indian bowlers as they looked set, rotated the strike and kept the scoreboard ticking in all opportunities.

Moeen looked set from the very beginning as he used his feet to good use and drove and cut well. He was quick between the wickets and understood the need of hour to rotate the strike with Root. They were comfortable against Amit Mishra, Ravichandran Ashwin and Ravindra Jadeja while both the pacers, Yadav and Mohammed Shami lost their lines in the second session.

Root was solid in his defence, cut and drove well and hit a huge straight six off Jadeja after getting to his landmark. On the other hand, Moeen was promoted up the order, maybe to keep the right-hand left-hand combination going, and he proved his promotion with a fine fifty on a crunch time. He will like to carry on in the same manner after Root and pile on more runs before stumps on Day One.

Earlier in the day, England were rusty with the bat as Indians asked questions to their openers but were not well supported by the fielders. Though Cook and Hameed departed and Ben Duckett followed soon, Root-Moeen ensured they did not give more space to the Indian bowlers and have put England on top on the opening day of the first Test here at Rajkot. 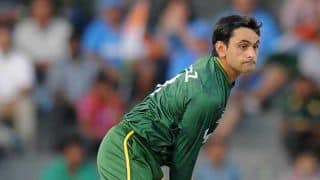