310 to win. 49 overs to go. The scenario was no less than one encounters in ODI cricket. Unfortunately, there was Virat Kohli at No.3 for India.

310 to win. 49 overs to go. The scenario was no less than one encounters in ODI cricket. Unfortunately, there was Virat Kohli at No.3 for India. In times like these, the Indian captain should have promoted himself ahead of first innings centurion Cheteshwar Pujara, who fell at the stroke of tea. India are 49 for 2 at tea on Day Five and they need another 261 runs to win with another session to go in this grueling Test that has been dominated by batsmen so far. India have lost the wicket of opener Gautam Gambhir and Cheteshwar. Murali Vijay and Virat Kohli are batting on 29 and 2 respectively. Live Cricket Scorecard: India vs England 1st Test at Rajkot

Vijay and Pujara enjoy batting alongside each other but this scenario is not something that they encounter too often. Both batsmen like to take their time to settle down but they did show intent to get the scoreboard moving. Tenth over into this session, England declared their innings at 260 for 3. Alastair Cook tried hoisting Ravichandran Ashwin over long-on and found Ravindra Jadeja at deep. He departed for 130 and that brought up the declaration.

Chris Woakes struck early in the Indian innings when Gambhir nicked one to Joe Root at second slip. Gambhir had a disappointing outing in the Test, managing only 29 runs. With KL Rahul fit, the Indian stalwart’s career looks in jeopardy. In an ideal One-Day game, a format that Vijay and Pujara do not play, Kohli comes in at No.3. He is amongst the finest in that format and raises his game in run-chases. Kohli, walking out at No.3, would have put England on the back foot and put pressure on them. However that did not happen. It followed the usual course as Pujara joined Vijay.

In the ninth over, Vijay stepped out and smacked one straight to Zafar Ansari. the ball was hit hard, it flicked the bowler’s palm and went for a boundary. Ansari was again in action in his following over when Stuart Broad dropped Pujara. By now, the team management must have lost the count on the number of catches that were dropped in this Test.

India had their share of luck but with Indian batsmen struggling to score at a brisk pace and England bowlers failing to grab their chances, a likely draw looms over.

Earlier in the session, Cook played an attractive inside-out shot over extra-cover for a boundary. The hit made Cook the fourth batsman after Clive Lloyd, Gordon Greenidge and Matthew Hayden to bring up 1,000 Test runs in India. He also became the first visitor to score five Test hundreds in India and his 30th Test ton saw him go past Don Bradman’s tally in Test cricket. Cook is now tied at the 11th position in the list alongside Matthew Hayden and Shivnarine Chanderpaul.

Stokes was in no mood to just hang around. The first innings centurion punished leg-spinner Amit Mishra with three boundaries in the 71st over. While Mishra struggled against the left-handers, Ashwin targeted the leg-stump, getting the ball to spin in sharply.

Otherwise, it was another day of toil for Indian bowlers. Cook and teenage debutant Haseeb Hameed began watchfully in the morning. Though Cook stroked away to the three-figure, Hameed missed out on a well deserved hundred when he hit one straight back to Amit Mishra. His family who witnessed him become the third youngest batsman to score a fifty for England, missed out on this moment.

Mishra was brought in one and half hours into the day’s play but he made up with the wicket of Hameed and soon he dismissed No.3 batsman Joe Root, who looked to step up in order to accelerate.

There are approximately 31 overs remaining in the day at India need another 261 runs to win. 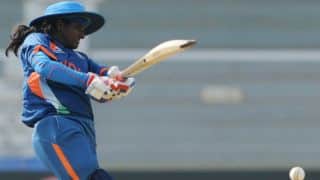 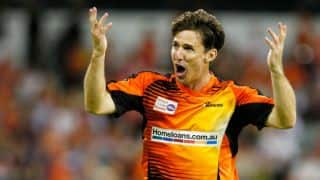