Virat Kohli is overall the 19th Test skipper to get dismissed hit wicket when he was well set on 40.

India‘s Test skipper, Virat Kohli, registered his name in an unwanted record by falling to Adil Rashid in a bizarre fashion in first session of Day Four of the opening Test against England. In the 120th over, Kohli tried to pull a delivery off Rashid but hit the stumps with his back foot. In this way, not only has he put India in a spot of bother in the ongoing Test with four wickets left and hosts trailing by over 100 runs, he also became the second Indian skipper, 20th Indian in whites to get dismissed hit wicket. Kohli is overall the 19th skipper to get dismissed in this fashion when he was well set on 40. Live Cricket Scorecard: India vs England 1st Test at Rajkot

Here are a few tables which will demonstrate an unpleasant feat achieved by India’s poster boy:

This list includes some of the greats of the game like Brian Lara, Greame Smith, Inzaman-ul-Haq with Kohli being the latest entrant. ALSO READ: India vs England 1st Test: Virat Kohli, Ajinkya Rahane depart early in first session

As mentioned above, Kohli became the 20th Indian, in Tests, to get out hit wicket. Kohli must be really annoyed with himself as he was well set on 40. Earlier, he was also dismissed in a similar way against the same opponents in fifth and final One-Day International (ODI) during India’s 2011 tour to United Kingdoms.

Not to forget, he also becomes the second Indian skipper after Lala Amarnath to have hit the stumps while batting in the purest format of the game. 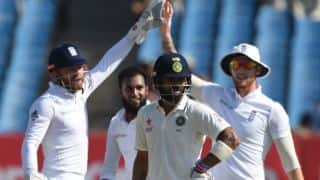 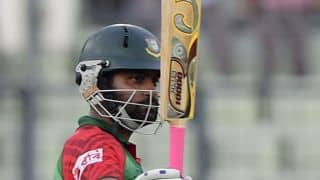