Kohli, has taken a big step forward to bury the ghosts of 2014 when he managed 134 runs in five Tests in England for an average of 13.4.

It took Virat Kohli one innings – or 172 deliveries, to be exact – of the ongoing India vs England Test series to make a statement. On day two at Edgbaston, the Indian captain battled his way to a first Test century on Indian soil, and it sent an ominous message to his critics and to England.

As wickets fell all around him, Kohli shored up the situation and used three drops – chiefly by Dawid Malan on 21 and 51 – to score his 22nd Test hundred. No other Indian batsman crossed 26.

He was on 97 when India lost their ninth wicket in the form of Ishant Sharma, but in the company of Umesh Yadav he carved his 14th boundary to reach three figures. 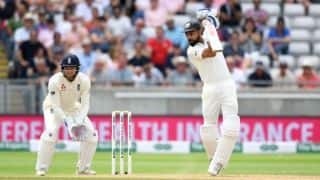