England batsman Kevin Pietersen on Thursday said that the slow-paced pitch prepared for the fourth and final Test at Nagpur is the toughest he has played on as far as scoring runs in concerned. 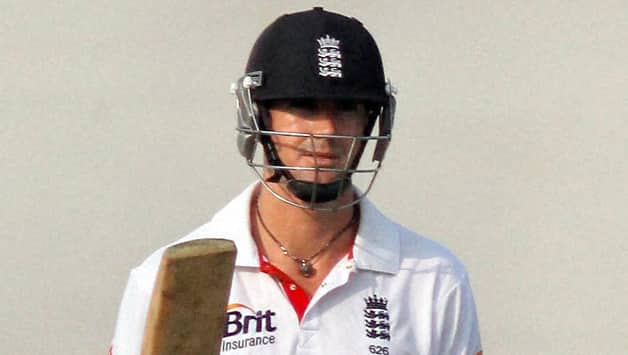 Kevin Pietersen scored batted cautiously during his innings of 73 PTI

England batsman Kevin Pietersen on Thursday said that the slow-paced pitch prepared for the fourth and final Test at Nagpur is the toughest he has played on as far as scoring runs in concerned.

“It’s toughest wicket I have played Test cricket on in terms of scoring runs. I don’t have a clue what the pitch will do later. It s playing pretty similar to what it did at the start of the day,” said Pietersen after the first day’s play.

Pietersen, whose 73 in 198 minutes off 188 balls is the top score in the tourists’ end-of-day first innings score of 199 for five, said his team was in a reasonably good position but the runs doesn’t mean anything until the game is over.

“Like I said after the runs in Mumbai, it doesn’t mean absolutely nothing until the game is over.

“I think we are in an okay position. I don’t know what that pitch will do later but it’s slow. I think the key today was to try to bat as long as possible because I don’t think that wicket is getting any better,” said Pietersen.

The England batting stalwart sounded happy that his team had two seam bowlers to bowl on this pitch, as he thought it was very difficult to score runs off Ishant Sharma, the home team’s lone pacer in the playing XI.

“I think we are in a position of strength, if I am allowed to say that, as we have two seamers. I found Ishant incredibility difficult to play today,” said Pietersen.

Jadeja, on the other hand, had claimed that the Indian team’s strategy of playing four spinners, including himself as a frontline bowler, would pay dividends in the second England innings as they can use the bowlers’ footmarks to extract spin more and more.

Asked whether the pitch could be termed a good Test match wicket, with shot-making so difficult, Pietersen said he could understand the Indians’ thinking as they were keen to win this game to square the series 2-2.

“Obviously Indians think that’s the kind of wicket they have to prepare to take the series back. We have had incredible challenge in last 2-3 years as a team and this is another one. As for viewers, I don’t think they will have any interest in what I have to say as they must have switched off 4-5 hours ago!,” he said.

Pietersen praised Jadeja, who made his Test debut, and leg spinner Piyush Chawla, brought into the team as replacements for Yuvraj Singh and Harbhajan Singh, respectively.

“They are good bowlers and good cricketers. If you look at the numbers, Jadeja has got incredible stats form this year’s Ranji…I saw them when I was waiting to bat. He has had a blinder of a year. Jadeja’s intensity in the field is good, Chawla as well.

“(But) for me, it’s a case of worrying about our dressing room,” he said.

Asked about the absence of Decision Review System in the series, Pietersen sidestepped the issue saying it was the Indian cricket board’s call.

“BCCI have their own reasons why they don’t want DRS. It has nothing to do with me or the England team,” he remarked.