India vs England 2012 Live Cricket Score: England bowled out for 413 on Day Three at Mumbai

India vs England 2012 Live Cricket Score: England bowled out for 413 on Day Three at Mumbai 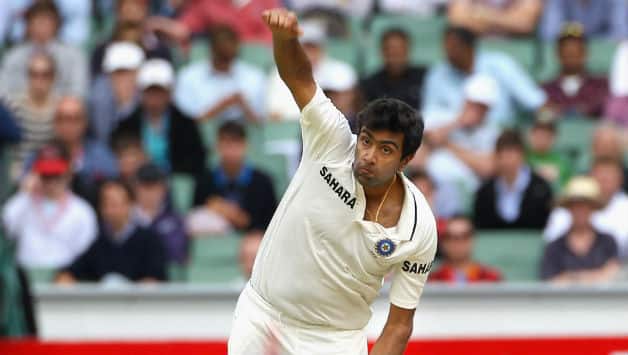 Pragyan Ojha dismissed Kevin Pietersen (186) after the latter played a blinder-of-an-innings to help England go past the Indian total on Day Three of the Mumbai Test.

Kevin Pietersen s innings of 186, included 20 fours and 4 sixes as he took the attack to the Indian bowlers. Samit Patel and Pietersen put on 59 runs for the fifth wicket before Ojha dismissed Patel with England at 357 for five.

In spite of a wicket, Pietersen kept his attacking instinct alive and continued to hit the Indian bowlers all over the park, scoring at a strike rate close to 80 before being dismissed by Ojha before Tea.

Matt Prior and Stuart Broad seemed like they could take England to Tea without losing further wickets but miscommunication between the two led to a run out, sending Matt Prior back to the pavilion.

Earlier, Cook and Pietersen both notched up their 22nd Test centuries and recorded the highest third-wicket partnership at the Wankhede, putting up 206 runs. The previous record was 194 runs set by Sachin Tendulkar and Vinod Kambli against England.

Ravichandran Ashwin (one for 105), who had been wicketless so far, finally got the breakthrough with half an hour left to go for lunch.