England have managed to put India under pressure early on the fifth day of the first Test at Trent Bridge on Sunday. Stuart Broad removed overnight batsmen Virat Kohli leg-before for eight and Ajinkya Rahane on 24. India are on 173 for five with a lead of 134 runs.

The start was delayed slightly due to the rain. The moisture in the wicket and the old ball seems to be doing the trick for England. The ho0sts were bowling to a plan to Kohli pitching it in line of the stumps. Broad finally managed to beat Kohli’s bat and dismissed him leg-before. India slid further when Broad found the dge of Rahane. Unlike the previous four days, the pitch has movement and the balls are carrying to the keeper. With overcast conditions, expect England pacers to strike more.

India were jolted by the twin wickets of Murali Vijay and Cheteshwar Pujara late on Day Four after they completed their fifties. From thereon, Kohli and Ajinkya Rahane took India to stumps without any more wickets. 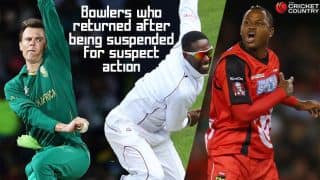