India are at 342 for five at lunch on Day Two of the first Test against England.

If the first morning had seen the ground bathed in smiling sun and blue skies, at the start of the second day’s play the minute hints of even benign clouds had been swept away by the deities of Test cricket.  The patches of white that remained in distant corners of azure were like stray balls of fluffy white cotton. They bore no malicious, moisture laden intent but seemed to be prompted by caring concern for the many spectators seated in uncovered stands.

The breeze notwithstanding, the sun beat down strong and purposeful, and sweat glistened from the foreheads of the poor stewards in their green blazers at the four corners of the pitch. Even Boria Majumdar, born and bred in hot and humid Kolkata, huffed and puffed into the press box, with heavy breaths punctuated with observations that it was hot. It was as near India as one could get in the midlands, with the breeze compensating the humidity with comfort. It seemed Murali Vijay and MS Dhoni could not have walked out in more favourable conditions.

However, the first hour carries perils that seep through all signs and symptoms of docility. England bowled to a plan. Run making proved to be a difficult, strained affair.

Stuart Broad started to Dhoni with one slip, a third-man and five on the off-side in front of the wicket, two of them close in whispering distance of each other in the short cover. A mid-wicket and a mid-on stood like lone frontier guards in the wide expanses of the leg side. The line was predictably wide of the off-stump. The second ball was a grubber, hugging the pitch, reaching the keeper on the second bounce. The over ended in a dull maiden.

Anderson bowled to Vijay from the pavilion end, with a five on the leg side, fine-leg, deep square-leg, short mid-wicket, short mid-on and mid-on while the captain stood at the lone slip. From the pitch, one side of the ground is considerably wider than the other … and that may be the reason for the distinctly different field setting from the two ends. The second ball was short and did not rise, and Vijay’s attempted cut towards the open spaces of the off side swished way over the ball. The first runs were again predictably a boundary to third man off a thickish edge, bringing back memories of the day before.

The first ball of Broad’s second over moved away outside the off stump, and Dhoni’s attempted booming drive took the edge. Matt Prior dived, his glove reaching out in front of Alastair Cook’s left knee at a slightly wide slip, and the ball was deflected to third-man. The dropped chance brought two runs. Dhoni’s response was some more swishes that passed dangerously close to the edge.

Both the bowlers stuck to disciplined lines, Broad widish outside off, Anderson probing on the middle — operating rigorously to their respective fields, generating a bit of swing with the still shiny ball. Dhoni was beaten multiple times on the drive, the feet stubbornly stationary.

The shackles were broken by Vijay with a dazzling drive through the covers off Anderson. When the batsmen crossed after a single to deep square-leg, James Anderson replicated the field of Broad and switched his line to wide outside the off stump. One delivery came back and cut through Dhoni, missing the inside edge by a whisker. The crease had seemed to have taken on the torturous proportions of a dentist’s chair for the Indian captain.

When Broad bowled to Vijay, there were again seven men on the off. Vijay shouldered arms, and the ball passed dangerously close to the off stump. An attempted square cut was almost chopped on to the stumps. It seemed all the sun had done was to dry up the runs, batting was proving to be a struggle. Broad’s figures read 23-11-28-1.

Once again it was Vijay who managed to squeeze in some runs. Broad pitched up and was square driven through the crowded off field for a four. The next ball was short and was cut away for two.

Ben Stokes came in for Broad. Dhoni pummelled a drive to cover to bring up the hundred of the partnership. The threat of Broad seen off, Dhoni stepped outside line of off stump and drove past mid-on for four.

Vijay offered the full face of the bat, playing strikingly straight. The head remained steady, poised down at the ball.  Cook moved one of the short covers to a shortish mid-off for the mistimed drive. But, the reservoirs of patience Vijay dug into seemed infinite. When Stokes sent one wide and full, the drive flowed past point for four. Cook removed himself from slip and put himself in a curious backward square leg. Was it a decoy? Similar to the one that foxed Michael Clarke at Chester-le-Street last summer? It did not bear fruit this time. The line remained outside the off-stump and Vijay defended with the same solidity that we have seen all through the last seven hours.

At the end of the first hour, India were 290 for four, only 31 added to the overnight score. The discipline of the English attack on this sluggish, unhelpful track was reflected in just five extras in the entire innings so far. Vijay was looking like he could bat forever. Dhoni had been hardly convincing, but he had managed to survive.

After the break, for a brief while Liam Plunkett came in round the wicket, with the tedious tactics of short balls, the sluggish pitch limiting the strategy to attempts at taunting the batsmen into an error of judgement. Stokes pitched wide outside the off, Dhoni took a step down the wicket and drove him, uppish, just past the outstretched grasp of cover, for four. When Plunkett pitched on the pads, Vijay resurrected cricketing memories of VVS Laxman with a crisp flick through mid-wicket. The score ticked over 300.

Moeen Ali was introduced after 20 overs, with no options remaining, and one could almost see the pressure lifting from the visage of Dhoni. However, at the other end, Vijay’s magnificent innings came to an end. Anderson brought the ball back in, with a hint of swing and beat his bat and thudded into the pads. The ball was missing the top of the stumps by about half a foot, but umpire Bruce Oxenford raised his finger. A dodgy leg before seemed the only way to get him out. Vijay’s innings lasted over seven and a half hours, 361 balls, included 25 fours and a six.

It was Ravindra Jadeja who walked in and immediately pulled Moeen for four.

A rather unnecessary quick single attempted by Dhoni almost nipped Jadeja’s innings in the bud. The throw by Stokes would have had the left-hander struggling, but in the end the scoreboard registered four overthrows. Jadeja celebrated by hoisting Moeen over the straight field for two massive sixes, the second landing just in front of the press box. Mix Moeen Ali and Jadeja and playing for lunch becomes a concept that died with the dinosaurs.

Anderson went through the last few overs bowling cutters at Dhoni, without slips, Prior standing up, stopping the captain’s walks down the wicket to meet the ball. Just before lunch a huge appeal for a catch at the wicket against Jadeja was turned down off Anderson. The bowler glared as he stood a foot from the batting crease. However, scowls constitute no substitute for DRS.

At the break, India are 342 for five. Dhoni has proceeded to 81, his progress through the morning sluggish and strained, just 31 added in two hours. Jadeja has raced to 24 from just 18. The progress has been slow, with some acceleration towards the end. The captain has had his stroke of luck, balanced by the unfortunate decision against Vijay. At the end of the session, the advantage has clearly shifted in favour of India. 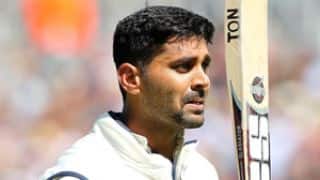