Bhuvneshwar Kumar and Mohammed Shami have added 87 runs for the 10th wicket for India.

All the good work of the morning was reduced to monumental nothingness in a bizarre period of five overs after lunch. And it was left to two Indian fast bowlers to grip their willows with purpose and carry out a fantastic repair job.

In the second over after the break, Ben Stokes pitched one short of good length. Ravindra Jadeja, timing the ball excellently before lunch, threw it all away by attempting to whack one close to the body through the covers. Matt Prior took the catch near his midriff. Till the time Jadeja can learn to control these impulses and convert these promising starts into decent scores in Test match cricket, he will be bogged down by the ‘domestic bully’ tag.

In the next Stokes over, MS Dhoni struck the ball to mid-off and set out for a quick single. James Anderson, long arduous toil with the ball notwithstanding, moved sharply and fired down the throw to catch him short at the bowler’s end. The captain’s wait for a hundred outside the subcontinent grows more and more prolonged. It was an innings of light and shade. Dhoni was fluent yesterday, scratchy this morning, but perhaps deserved the hundred for his resilience. However, he had only himself to blame for the dismissal.

Stuart Binny, walking out for the first time for India, drove a few fluently and straight to the fielders. The swing of the bat looked impressive, even classy, until one went to Joe Root at point on the full. Stokes exulted and the debutant dragged his feet back for one. And Ishant Sharma, perhaps disturbed in the early moments of an anticipated postprandial nap, shouldered arms to a straight one. Four wickets had been knocked over for two runs after. The length of the tail was suddenly under the microscope.

And then we witnessed the sting in it. There ensued the last wicket partnership that more than compensated for the collapse with valuable runs and inflicted frustration.

It started with some snickers around the ground as Bhuvneshwar Kumar turned down singles to keep Mohammed Shami away from Broad. Anderson jogged and then all the way to deep mid-wicket to retrieve a ball as the batsmen walked a single. Prior took the throw at the other end. Bhuvneshwar was perhaps justified, with his rather decent batting ability weighed against Shami’s unproven credentials.

Broad persisted with one slip and three men in an arc from short point to short cover even when Bhuvneshwar batted. The Indian No 9 hoisted him over mid-off for four. Bhuvneshwar proceeded to essay some elegant drives and flicks, getting behind the line with composure and ease. For Anderson, Alastair Cook stationed a phalanx of three men between short mid-wicket and short mid-on. Anyone who had accused the England captain of lack of imagination has been treated to an overdose of flights of fancy in the art of field placing.

Bhuvneshwar’s batting can be termed promising without resorting to hyperboles, the timing and style hinting at serious ability. Shami started with the classic tail-ender slogs before switching to several strokes of pedigree. One such was a drive over mid-off off Moeen Ali that brought up the fifty partnership. The ease with which the two played Moeen underlined the deplorable state of England’s spin department. An edged boundary from Bhuvneshwar off Broad brought up the 400. Thanks to the sterling show of the final pair the psychological barrier was crossed. However, it also pointed out what might have been but for the careless loss of wickets immediately after lunch.

As the drives, glides and cuts flowed with an eerie calmness, Stokes changed to the outside the off-stick line. Shami flicked him from outside off. Bhuvneshwar repeated the stroke with more class and better results. The English shoulders started to droop.

With nine wickets down, tea was delayed but it just prolonged the torture for the hosts. The pair easily survived the extra half hour and added plenty.

Liam Plunkett proceeded to try the round the wicket ploy to the last pair, bowling fast, short and into the body. In some ways it was an admission of surrender, a fast bowler unable to dismiss the No 9 and No 11 with traditional methods. Bhuvneshwar was struck on the glove by one snorter, Shami but the rest were negotiated with poise and plenty of time to play the strokes. Shami dispatched him to the point boundary with a superb square cut. A repeat of the stroke, played in the air and finer, fell just short of Broad at third-man. The close shave only added to the considerable quantities of frustration building up among Cook’s men.

The desperation increased further when Shami hoisted Broad over mid-wicket, and placed it with precision between four fielders on the leg side. The No 11 rubbed it in by flicking an attempted yorker to fine leg for four. It took Shami to 37, his highest-ever score in First-Class cricket.

The last wicket partnership amounted to 87 scored in 30 long overs. Kumar is on 46, Shami 39. India stand pretty on 433 for nine, the wickets and runs following each other during the session in logic defying sequence. But these are the sessions that lend credence to the cliché of glorious uncertainties. This is what makes Test cricket the wonderful game it is. 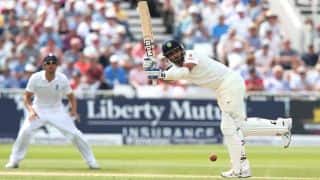