Indian medium pacer Bhuvneshwar Kumar has said that he learnt from the mistakes that English bowlers committed on the opening day to perform well in the ongoing second Test at Lords.

“We learnt from the English bowling on day one and we saw that they bowled too short at times. So we watched and learnt what lengths to bowl and adjusted out bowling accordingly,” Kumar said after the second day’s play yesterday. Kumar took 4-46 in the hosts’ first innings as they reached 219/6 at stumps on day two in reply to India’s 295 all out.

“I am enjoying bowling in England. It is definitely a good feeling to perform well at Lord’s,” Kumar said about his incisive spells. “I have been watching Test cricket held at this ground since I was a child and this is something I have been looking forward to for a long time.”

Talking about a disciplined bowling performance, he added, “The plan is to bowl outside the off-stump. There has been assistance from the wicket in this Test but even then it is important to stay disciplined.”

The Indian bowling didn’t allow the English batsmen to settle down at any stage during the day’s play and at one stage they were reduced to 113/4 before Gary Ballance‘s second Test century, his second at Lords in as many tests, saved the day for them.

“Now it is comfortable to bat as the wicket is easing out a bit. But there is still some help in the pitch for our bowlers and we need to take more wickets tomorrow. It will be easier for the batsmen to bat on day three but it can be difficult if we can bowl in the right areas,” said Kumar.

But it isn’t just the bowling that Kumar is excelling in England. He has had two fifties on tour so far, both of them scored during the first Test at Trent Bridge and even here at Lord’s he added a valuable 36 runs with Ajinkya Rahane and their 90-run partnership helped steer India towards a valuable total.

“I am enjoying batting in England as well. It always gives you pleasure when you score runs in Test cricket. Coach Duncan Fletcher talks about how important runs are from the tailenders, so I have been working hard in the nets to help the team,” Kumar added. 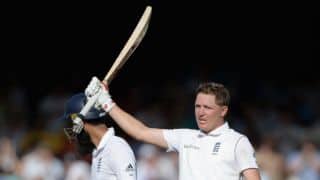