Pujara and Vijay have been very determined in testing conditions.

Cheteshwar Pujara and Murali Vijay are gradually helping India motor along in the second Test between India and England at Lord’s. On the green pitch, India lost the early wicket of Shikhar Dhawan, but since then, they have batted well and have moved into a reasonable situation. In 20 overs, India are 43 for one.

On a green surface, Vijay and Pujara have batted with great responsibility. England have not tested them as much though. Too many deliveries have been pitched short and very few have been full. In doing so, they have allowed the Indian batsmen to show the level of patience that they have. Vijay did drive a couple of full deliveries though. The second one was through mid-off and went for four.

Earlier, England had chosen to bowl after Alastair Cook won the toss. They have not made any changes to the side and even India remain unchanged. Looking at the green tinge on the surface, the spinners were not going to have much effect and that is why they were kept that way. 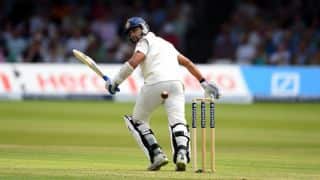