Ishant and Bhuvneshrwar maintained a steady line, the line as disciplined as before lunch.

It was a battle for the upper hand that remained unresolved through the second session. For two hours, the Indian bowlers stuck to a meticulous line while the English batsmen batted with resolve and restraint to chip away at the Indian total. In the end, 74 runs were scored for the loss of two wickets. It was absorbing, gripping cricket, somewhat slow but always on the edge.

The period after lunch was quiet, two sides circling each other like careful pugilists. India was the aggressor, throwing exploratory punches, trying to soften up the opponent, to land a decisive blow. The English were content with weaving ducking and blocking. And the first exchange of real punches favoured India. The most experienced batsman of the England middle order walked back.

Both Ishant Sharma and Bhuvneshrwar Kumar maintained a steady line, the line as disciplined as before lunch. runs were difficult to come by, the score inched along. It remained a deadlock until Kumar pitched short and was slapped over the slips for four by Gary Ballance. And it was Bhuvneshwar who generated the big breakthrough. A ball spit up from short of good length, struck Ian Bell on the glove and travelled ever so gently to Ravindra Jadeja at third slip. The biggest name in the England middle order walked back for 16. It was 73 for three. Bhuvneshwar had taken all three.

The sun was beating down, Rahul Dravid, brought up in the heart of the tropics, had given up the struggle with the weather and had taken off his blazer, and was commentating in shirt and tie. In these circumstances Kumar had bowled long and hard. It was commendable indeed. But, sticking to three bowlers was slowly taking its toll. Bhuvneshwar was visibly tiring, and Ballance took a couple of boundaries, one of them all run with new partner Joe Root. Stuart Binny was introduced in the 38th over of the innings. The first ball was widish, Ballance drove away from the body and picked up an edged boundary to third man. After his stodgy progress before lunch, the England No 3 had opened up quite a bit. At the end of the first hour, he was on 32. England 91 for three.

Almost immediately after the break Balance edged Binny between Dhoni and Shikhar Dhawan in the first slip. Neither men went for it and the ball slipped through to the fine boundary. As in the case of the chance offered by Sam Robson in the first session, the streaky boundary left in its wake, plenty of questions about India’s slip cordon. In the next Binny over, Ballance drove one down the ground for four, following it up with a glance around the corner for another boundary. There were already ominous signs that the magnanimity of Dhoni and Dhawan could prove costly. The hundred was brought up in the 42nd over. Apart from the nick generated by Binny, the bowling was looking easier. There was nothing loose on offer yet, runs were still hard to come by. It was tidy but without the edge. There was no sign of Ravindra Jadeja yet.

He was introduced soon enough, in the 45th over, the score 111 for three, and trotted in with a slip and a short leg. And he struck in his second over. The ball was straight and skidded on, and umpire Bruce Oxenford could not make out the substantial inside edge. The young man walked back for 13. It was Jadeja’s first wicket of the series. The score read 117 for four. Both teams were struggling for the upper hand.

In came Moeen Ali and slogswept the first ball over mid-wicket for four. It did not help him wrest the initiative. Jadeja, like the rest of the Indian bowlers, maintained a steady line. Murali Vijay came in for one over before tea, with Ballance poised on 49. The Yorkshireman cut him to deep point for a single to bring up his fifty. At tea, the score stood at 125 for four, with the pitched battle proving inconclusive. 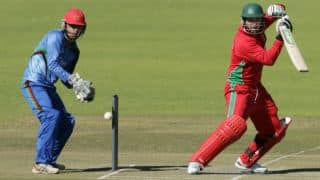 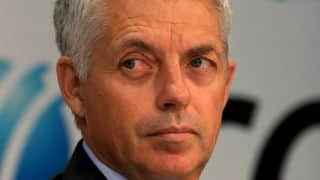