If it had been a tense, riveting Test match so far building up like an epic novel of suspense, the second session started at the frantic pace of a high octane thriller. For the last few sessions, the situation cried for one defining performance to put one of the sides in the driver’s seat. In the first hour after lunch, the partnership between Ravindra Jadeja and Bhuvneshwar Kumar probably provided exactly that.

James Anderson charged in with the new ball, the first over after lunch, and Jadeja charged down the wicket and pulled him off the splice of the bat for a single. It set the tone for the session. Liam Plunkett came on from the Nursery End and Jadeja scampered twos like a man possessed. When Plunkett pitched up, he lofted him over the extra cover for four. The lead was over 250.  The Lord’s scoreboard, unable to cope up with this frantic rate, had gone off for a siesta after lunch. There was a power problem, we were told.

Runs were pinched to the infield, a lot of tip and scramble. Precious bits were added to the total. Anderson bounced from round the wicket. It clipped Jadeja’s glove, then his helmet, and fell short of Joe Root in the gully. The game was paused for a pretty long while as a new helmet came out from the dressing room.

The next ball Jadeja faced was played to the sweeper to bring up his fifty. It had taken just 42 balls, every run worth its weight in gold. Jadeja celebrated by waving his bat Bruce Lee style, like a three piece nunchaku. It was Bhuvneshwar who celebrated it in cricketing fashion, driving Plunkett off the backfoot to the square boundary with impeccable poise. The stand was over fifty, every run of enormous value.

Anderson’s following over was spectacular. The first ball was whacked over his head for four. Jadeja was not pulling any punches yet. The second was short and a furious hook swished in the air without making contact. The third was short and brutally slashed away past point for another boundary. The fourth almost killed umpire Kumar Dharamsena as Jadeja unleashed a fierce pull for a single. Bhuvaneshwar Kumar cut the final ball over the slips for four. The 300 was up, the lead was 278. The first five overs after lunch had brought 35. The final fifty had come off 44 balls. The ball had been beaten out of shape.

Plunkett bowled with the changed ball and struck a charging Jadeja on the glove. As the southpaw signalled for medical assistance, Bhuvneshwar drove with elegance and panache through the off-side for four.

By now, Alastair Cook could not afford more than one slip for Jadeja. The field spread out and the batsmen picked up ones and scampered twos. Bhuvneshwar on-drove Broad between mid-on and mid-wicket to pick up his second all-run four. The partnership was worth 81.

Plunkett pitched short with three men on the boundary between deep midwicket and long leg. A short leg perched for a fend and a third man out for the upper cut. And Jadeja pulled him over mid-on for three. The following over Broad sprayed one down the leg side and it eluded Prior for four byes. The lead was over 300. The next ball took the edge of Bhuvneshwar’s bat and went past third sleep for four. The last ball of the over was delicately late cut for four. The Indian No 9 had been compact, correct and at times more than classy.

Plunkett had gone for 23 off four overs after lunch. He was replaced by Ben Stokes. Jadeja flicked him with tremendous bat speed, the ball flew to Ian Bell in the shortish midwicket and the Englishmen groaned in anguish as it popped out.

After 10 overs had produced 67 runs since lunch, Cook turned to Moeen Ali’s off-breaks. It drew a faint edge from Bhuvneshwar and Prior could not hold on.

As English shoulders sagged, Jadeja rushed down the wicket again and swiped mightily at Stokes. The top edge went steepling up in the air, and for the second time in the day, Cook ran back – this time from slip – and held another pressure catch. Jadeja walked back to a rousing ovation, having played a potentially match changing knock of 68 from 57 balls, the runs amassed with a bat wielded like the hammer of Thor. The partnership for the ninth wicket had been worth 99 from just 100 balls. The lead was 310. During Jadeja’s tumultuous stay at the wicket the complexion of the match had undergone a rather dramatic change.

In the very next over Moeen sent back Mohammed Shami with a ball that did not turn. The edge was as fine as it could be and there was almost no deflection as it went through to Prior.

With Ishant Sharma, the last man, walking in and seeing off Moeen’s over, Bhuvneshwar lofted Stokes straight back over his head to bring up his third fifty in four innings. He has been one of the most consistent batsmen among the visitors. This one came off just 65 balls, and perhaps the most crucial. “I think England should hit Bhuvneshwar with a level 3 offence for being too bloody good,” tweeted Michael Vaughan.

And then it ended. Stokes pitched on length and Bhuvneshwar’s outside edge flew to Bell at slip. India finished on 342, setting a target of 319. And curiously, Bhuvneshwar and Jadeja were expected to hold the key with the ball as well.

England started their chase with some anxious moments. A loud appeal for caught behind against Cook was turned down and Sam Robson almost lost his wicket twice to balls keeping low.

With tea approaching, MS Dhoni introduced Jadeja after just six overs with the new ball. And riding a tidal wave of inspiration, he struck with his first ball. Robson stuck out his pad, his bat trailing. The appeal split the London air and umpire Dharamsena’s finger went up.

With Gary Ballance coming in, there were two left handers at the wicket. Jadeja pitched on the rough outside the off-stump and twice the ball went tantalisingly through the two short legs.

Tea was taken with England tottering on 18 for one, plenty on their minds to keep them from enjoying the afternoon refreshments. 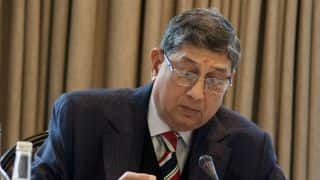 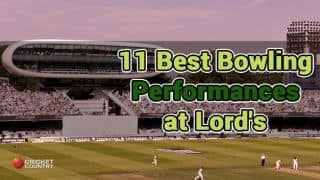