Pujara and Kohli are the unbeaten batsmen for India.

India have gone into lunch on Day One at 73 for two in the second Test against England at Lord’s. On a tricky surface, with grass all over it, India fought hard and did well. Cheteshwar Pujara and Virat Kohli are in the middle. James Anderson and Liam Plunkett are the wicket-takers for England.

When the covers were taken off, we all were in for a huge surprise. One could hardly distinguish between the wicket and the square as the pitch had a lot of grass on it. Thus, Alastair Cook had no hesitation in putting India in when he won the toss. Both sides retained their respective XIs that played the game at Trent Bridge. This game is of course played in the backdrop of the Ravindra Jadeja-James Anderson pushgate incident.

Using the conditions early, Anderson struck as Shikhar Dhawan edged one to second slip. That was Anderson’s 230th wicket on English soil, going past Fred Trueman’s record of 229. After the early wicket, India were circumspect. Murali Vijay was determined and left deliveries outside the off-stump. Even when he edged one early in his innings, Matt Prior couldn’t hold on to a tough chance to his right. Pujara worked hard and took 25 balls to get off the mark. The England bowlers were too short and did not pitch it up too often. Whenever, it was pitched up, the Indian batsmen were ready to drive.

Vijay battled, driving occasionally, but at 24, he edged one off Plunkett and was caught in the slips. The score is not an indication of how well he played on the day when the ball was moving around. But, in came Virat Kohli and played a different game. Striking a few half-volleys with confidence, he moved past double figures at better than a run-a-ball. He did have a life at the end of the first session as a faint edge of Moeen Ali wasn’t taken by Prior 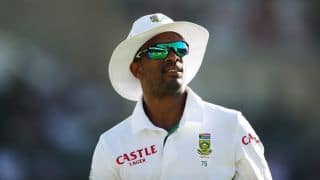