The impeccable Bhuvneshwar was well supported by Ishant and co.

At the end of six gruelling hours on a hot, sultry, steaming day, the tussle for supremacy remained locked in a stalemate. For much of the final session, England seemed to have taken control of the match, but the relentless discipline with which the Indian attack conducted themselves bore fruit late in the day. During the last half an hour, the complexion of the match changed again from any colour it might have acquired back to neutral.

After Tea, hustling in with his hair flowing, Ishant Sharma took the ball away from the two left handers up the slope. Gary Ballance, showing increasing poise and control of the situation, steered him to third man for four. MS Dhoni countered by taking the cover out and placing a fourth man in the slip cordon.In the next over Ishant pitched short and was cut away to the point boundary with lots of power and panache.

At the other end Jadeja induced a top edged sweep from Moeen Ali, but it ran away to the boundary behind the keeper. There was already some rough created outside the left hander s off stump, and Jadeja seemed to be looking at the area with increasing interest. Moeen inside edged one just past the leg stump. The covers were left open, encouraging the big drive against the turn through the vacant spaces stretching from backward point to mid-off.

A rested and rejuvenated Bhuvneshwar Kumar replaced Ishant. Ballance drove him down the ground past mid on for four to bring up the 150 of the innings.

The next hour saw Ballance and Moeen stitch together a vital collaboration. The tussle was keen, the focus on occupation rather than accumulation. The England No 3 batted with admirable temperament, making India pay heavily for the vital lapse in the field in the previous session. Moeen, tentative and uncertain, grew in confidence and skipped down the track to loft Jadeja over cover.

The partnership grew into threatening proportions, the breakthrough eluded India in spite of best efforts. Yet, the frontline bowlers did not falter from their line, length and direction. The shoulders did not sag. The resolve was not dented. This day can rank as exemplary in the recent history of Indian tours.

And then ran in Stuart Binny, the weak link in the attack, and like the perfect professional Ballance seized his opportunity. Two half volleys produced two boundaries towards the off side. The following over from Binny produced few more deliveries in the slot. Two flicks through midwicket brought up a hundred of quality and immense value quite the perfect response to the curious press he has been pelted with in recent times. He celebrated the feat by driving Binny straight down the ground for another boundary.

The match was now running away from India. Vijay was brought back more as a catalyst to hasten the second new ball, and Moeen pulled him for four. And suddenly against the run of play it was this occasional innocuous off-spin that produced the much needed blow. Moeen played casually, trying to turn Vijay to the leg, was trapped in front. He walked back for 32, the score 211 for five and the stand had been worth 98.

With eight overs to go, Liam Plunkett was sent in as a night watchman a curious ploy, perhaps to shield Matt Prior from the new ball. But, that implied that the England team management had plenty of faith in their tail to expect Plunkett to survive the new ball during the last few overs. He did, but there was a bigger blow at the other end.

Vijay had done his bit with that one over. Bhuvneshwar ran in with the new ball. And within two overs, this man who can do no wrong on the tour, pulled India firmly back into the game. The ball went down the leg side, Balance attempted a deflection down to the fine leg. The edge was thin and Dhoni flung himself to his right to hold it. The left hander walked back for a battling 110. Once again the match tottered on the knife s edge.

Prior had to come in after all, and his joints seemed to creak as he batted through the last few anxious moments. Plunkett edged Bhuvneshwar short of slips, fished outside the off and managed to survive. The score at the end of the day stood at 219 for six. After three attritional sessions, the honours remained steadfastly even.

England bat deep and with quality, but the Indian attack has shown heart and purpose to battle tough problems. Bhuvneshwar has been outstanding with his figures of 23-9-46-4, and the rest of the attack, with the possible exception of Binny, have stuck to the task with a zeal seldom witnessed among the Indian touring teams.

Like every session of the day, the first of the morrow will be crucial. It will perhaps determine the first innings lead,or even the match and the outcome of the thus-far closely fought series. 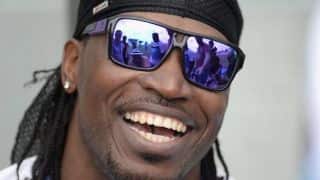 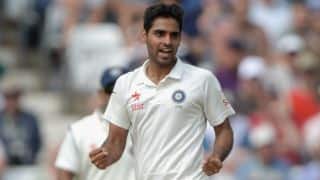