Rahul Dravid the former Indian captain, was also given the honour of ringing the bell.

Kapil Dev, the former world cup winning Indian captain, will ring the bell at Lord’s to commence the fouth day’s play in second Test between India and England. It is a tradition to ring the bell at Lord’s to indicate the start of play. Rahul Dravid, another former Indian captain, was given the honour for this on the first day of the Test match. However, Dev played 131 Test matches and 225 One Day Internationals (ODI’s) for India. The fast-bowling all-rounder also lifted the World Cup as captain at Lord’s in 1983. Kapil was named as India’s Cricketer of the Century in 2002.

Currently Kapil is in Lords to do commentary for the broadcasters, Stat Sports. Dev became the second player in the history of Test cricket to take 400 Test wickets after Richard Hadlee, and went on to become the first player to take 400 wickets and score 5,000 runs in Test matches. In his career he has scored two centuries against England, with 77 not out his highest score at Lord’s during the 1990 Test. 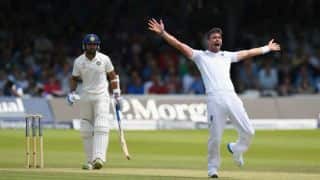 Cheteshwar Pujara, Murali Vijay take India to 84/1 at tea on Day 3 of 2nd Test against England at Lord's