India captain Mahendra Singh Dhoni committed an elementary error by employing Bhuvneshwar Kumar from the wrong end. This contributed to India arguably conceding an avoidable first innings lead to England on the third day of the second Test, in a series of five, being played for the Pataudi Trophy. Swing bowler Bhuvneshwar has quite simply been outstanding in the two matches of the current contest. He has capped his five wickets in an innings in the first Test at Nottingham with a tally of 6/82 in 31 overs – four of which were captured overnight – in the first outing in the second. In effect, he has by far been the chief wrecker for India and Dhoni’s automatic go-to bowler.

On the second day, he took three of his wickets bowling from the nursery end, which was the right side to utilise him from, as, among other reasons, there was more grass on the pitch at the pavilion end than otherwise. Since Bhuvneshwar is presently India’s most potent bowling weapon, most likely to take a wicket, it was only logical to give him the benefit of the turf cover. The wind was, admittedly, blowing more from the pavilion end but this was not constant, in fact, changeable in its direction. It had rained until an hour before start of play. There was, over and above, a helpful cloud cover and the ball was only six overs old. It was perfect for a quicker bowler. All factors pointed to Bhuvneshwar being introduced from the nursery end. But horror of horrors, he was asked to labour from the side of the pavilion.

Indeed, contrary to his exhibition the previous day, he bowled a relatively unimpressive spell of three overs for 12 runs and no wickets. More importantly, this and Ishant Sharma’s lack of success at the nursery end, permitted Liam Plunkett, who is primarily a bowler with a batting average of merely 11.73, to post a 50 for the first time and thereby guide England to a lead. When Dhoni switched Kumar around to the nursery end, the medium pacer began with a maiden. Swinging the ball more menacingly and looking more threatening, he removed both Ben Stokes and Stuart Broad in the next over to achieve the breakthrough India could have obtained much earlier. England were 76 runs in arrears with six of their wickets down when play resumed Saturday.

If India register a sizeable second innings total, England’s 24 run first innings lead may not make a decisive difference, especially since the latter will be batting last on a wearing wicket, when Ravindra Jadeja’s left-arm trundlers could play an influential part. At the same time, the psychological blow the home side would have suffered had they failed to secure a surplus after inserting India on the first day on a green-top, may have made them despondent already. 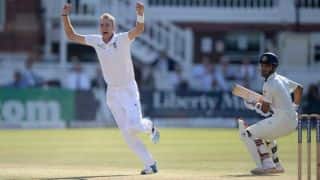