Statistical highlights after day four of the second Test between India and England.

Statistical highlights after day four of the second cricket Test between India and England at Lord’s on Sunday.

# Murali Vijay, with 317 runs at an average of 79.25, has established an Indian record for the highest tally in two Tests in the same rubber vs England in England, eclipsing Sourav Ganguly’s aggregate of 315 (ave.105.00) in three outings in 1996.

# Vijay became the second Indian batsman to be dismissed in the nervous nineties in a Test match at Lord’s. Rahul Dravid had also scored 95 in 1996.

# Stuart Binny has posted his first duck in Tests.

# Kumar became the third all-rounder to post a fifty and take five wickets in an innings in the same match in consecutive Tests, joining Richard Hadlee and Ian Botham.

# Jadeja and Kumar were associated in a stand of 99 – India’s highest eighth-wicket partnership vs England in England, eclipsing the 97 between Madan Lal and Sandeep Patil at Manchester in 1982.

# In Indian innings, the last three wickets, have totalled 107 runs – the ninth time when India have amassed 100 runs or more in the third match innings in away Tests.

# Liam Plunkett (3/65) has recorded his best bowling figures vs India in Tests.

# Since recording 51 vs Australia at Melbourne in December 2013, Cook has not scored even 30 in nine innings.

# During the course of his aforesaid knock, Cook became the eighth batsman to amass 4,000 runs in Tests in England.

# Ishant Sharma has claimed Cook’s wicket eight times in 10 Tests – the most times he has dismissed a player in Tests.

# Gary Ballance became the first England batsman to amass 200 runs in the present rubber – his tally being 208 (ave.69.33) in three innings. 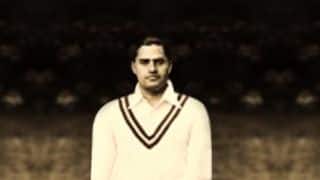