Statistical highlights after day five of the second Test between India and England.

Statistical highlights after day five of the second cricket Test between India and England at Lord’s on Tuesday.

# Ishant’s performance is the fifth best by an overseas bowler apart from the best by a bowler from the sub-continent) at Lord’s – the best figures are 8 for 38 by Glenn McGrath for Australia in 1997.

# Ishant Sharma has received his second Man of the Match award in Tests – his first was for taking ten wickets against the West Indies at Bridgetown in 2011.

# Two Indian fast bowlers – Bhuvneshwar Kumar 6/82 and Ishant Sharma 7/74 – for the first time in a Test match, have bagged six or more wickets in an innings.
# Fifty four byes conceded in the Test is an unwanted record in a Test match in England. The 1905 Trent Bridge Test between England and Australia had witnessed 52 byes.
# Since registering a 74-run victory over Australia at Chester-le-Street in August last year, England have not won a single Test out of last 10 Tests, losing seven and drawing the remaining three.

# Under Cook’s captaincy, England have won nine, lost eight and drawn eight out of 25 contested – winning % 36.00.

# England’s above loss is their second in the last twelve Tests at Lord’s, having won eight and drawing two.

# Joe Root’s performance against India is excellent, totalling 326 in five innings (ave.108.66), including a century and two fifties.

# Root’s batting average of 84.42 at Lord’s is excellent – his aggregate being 591 in eight innings, including two hundreds and two fifties. 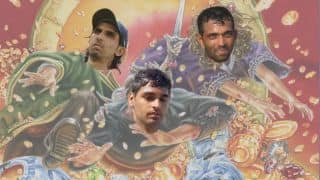