Hales started slowly but soon unleashed a flurry of boundaries.

Alex Hales was looking good for England against India in the third One-Day International (ODI) at Trent Bridge, Nottingham. After a nervous start, England started speeding things up, with Hales unfurling a flurry of boundaries against Mohammed Shami and Mohit Sharma. Mohit went off the field for a while as well, being replaced by Sanju Samson. 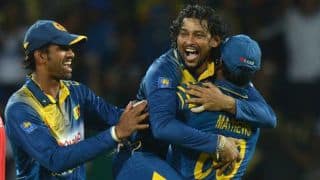