Raina was caught by Woakes off Tredwell.

Suresh Raina was dismissed just eight runs short of what would have been a fine half-century for India in the third One-Day International (ODI) between India and England at Trent Bridge. Raina followed up his belligerent 100 in the second ODI with another positive innings that took India to the cusp of victory. 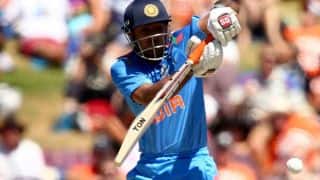