India vs England 2014, 3rd Test at Southampton: England in control at Tea

India vs England 2014, 3rd Test at Southampton: England in control at Tea

The Indians treated James Anderson with restraint, while bowlers at the other end were milked for runs.

The session started with an early jolt, followed by a sparkling recovery, and the end marred by a colossal brain freeze towards the fag end. As the blazing sun spread itself across the beautiful amphitheatre, the afternoon’s cricket atmosphere was braided with the glitter of some exquisite drives by Ajinkya Rahane and Virat Kohli. The former caressed Moeen Ali through extra cover, and when Chris Woakes replaced him, Kohli threaded him through the same region. Runs came at brisk pace, all around the wicket. Both the batsmen looked in fine touch, finding the gaps with ease. It was the hottest part of the scorching day, the pitch was placid, the ball getting older, the most difficult phase for the bowlers.

The Indians treated James Anderson with restraint, while the bowlers at the other end were milked for runs. The tactic almost backfired when Chris Jordan replaced Woakes at the Northern End. Kohli threw his bat at a short ball and sent it over the slips off the top edge. Alastair Cook sprang upwards from first slip and got his fingertips to it, but the ball ran away to the fine boundary.But Kohli did not capitalise on the reprieve. This morning he had been a picture of confidence, predicting to Michael Vaughan that it would be his day. And now, after the loads of patience against Anderson, he hung his bat out rather needlessly.

The ball took the edge and Cook caught it low down to his right. Kohli had scored more than all his previous innings of the tour combined, but 39 was way short of what India required from him today. More importantly, he had been batting like a dream till this miserable stroke.At 136 for four, the innings was tottering. Anderson’s figures after lunch read 4-3-1-1.The next Anderson over produced another scare. Anderson’s ball did not bounce at all and missed the off-stump by a whisker as it raced to the fine boundary for four byes. Rohit Sharma started with utmost caution, survival foremost on the mind, way ahead of initiative.

Stuart Broad replaced Anderson after an excellent five over spell and Rahane pushed a single to cover, reaching out a bit too far, the ball travelling a bit too long in the air. It was a period of tentative, hesitant batting. Drinks were taken at 160 for four.A wicket had been lost every hour. The wicket was easy enough, but there was something on offer to keep the bowlers running in with keenness.

Rahane started the second hour after lunch with two sublime punches off the backfoot to Jordan, both screaming away to the point boundary. The class of the man was evident once again, as was the lack of support for Anderson and Broad. The next over Cook pushed a man back to the square leg fence. It proved a decoy as Broad ran in and pitched up. Rahane went for the drive and missed. He leant on the bat, chastising himself. He knew how important his wicket was at the moment.

The two Mumbai batsmen batted through a quiet phase, Rahane pleasing, compact, assertive while Rohit watchful, correct and cautious. Broad was seen off, and Woakes came back. A short cover stood in front of the wicket. Rahane turned him to the leg for a grace to get into the 40s. At the other end, Moeen was turning his arm over. The bowling lacked tooth, England with lots and lots of runs to play with, was banking on patience and perhaps quick overs to get to the second new ball.

After a commendable show of patience, Rohit danced down the track and lofted Moeen over mid-off for four to bring up the fifty of the partnership. Rahane celebrated it with a disdainful pull off Woakes, past mid-wicket, classy and almost evoking memories of Sachin Tendulkar. The next two balls were outside the off stump, and beat the outside edge as the batsman pushed forward. Rahane got past this tiny phase of unease by driving Woakes past point for three.

Moeen jogged in for his next over and Rahane pushed him to mid-on to sprint across for his 50th run. It also took India to 200. The Indian No 5 has been the most sparkling jewel in the middle order in the series. In the meantime, theoff-spinner followed it up with a long hop and Rohit responded with a mighty pull to the mid-wicket fence. The partnership was growing and at a brisk rate. The enormous pressure was slowly lifting from the batting line up.

Woakes did produce the occasional alarm. Rohit played away from his body and inside edged it past the stumps to the fine boundary. And in the next over, there was the celebrated brain freeze raising its inert and ugly head. With a couple of overs to go for tea, Moeen pitched up, the ball innocuous and guileless, and Rohit took a step down the wicket and hit it straight down the throat of Broad at mid-off. The partnership had blossomed to 74 from just 111 deliveries, and was nipped by this atrocious stroke just as it promised many many more. Losing a wicket every hour, many of them generously gifted, remained the trend of the innings. India stood at 214 for five, several miles to go till safety, distance that could have seemed a lot less imposing had wickets not been lost to bouts of carelessness.

Rahane is still there with 52, MS Dhoni has joined him and there are the unpredictable pyrotechnics of Ravindra Jadeja to follow. India will need to bat out of their skins from now on to ensure that England bat again, and more importantly, will have to keep a tight leash on the suicidal impulses. 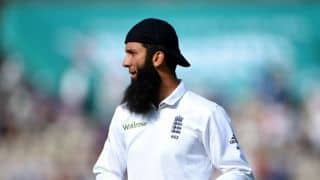