Cook finally bounced back with an innings of 95 at Southampton.

England captain Alastair Cook fell agonisingly short of ending his barren spell without a Test hundred as he made 95 against India at Southampton on Sunday. Cook, after winning the toss on the first day of the third Test, was five runs shy of his first hundred at this level in over a year when he got a bottom edge trying to pull-sweep left-arm spinner Ravindra Jadeja and was caught behind by opposing captain and India wicketkeeper Mahendra Singh Dhoni. In all Cook, faced 231 balls, including nine fours and batted for 10 minutes short of five hours.

Together with Gary Ballance (104 not out) he put on 158 for the second wicket. However, Cook should have been out for 15 when he edged India debutant paceman Pankaj Singh only for third slip Jadeja to drop the catch. “If you’d have offered me that (95) at the beginning of the day, of course I’d have taken it,” said Cook, who has now gone 28 innings since scoring the last of his England record 25 Test hundreds.

“I’m disappointed because it adds to the innings without a hundred, but I’ve batted okay and it’s nice to finally contribute. I can’t tell you how much I wanted to score a hundred,” he added. “The support I have had throughout this period, which I’m not through yet but it’s a little step in the right direction, has been great. When you don’t score runs you sit back in the dressing room and you watch people do that and you try to talk about it, you try to lead from it but when you don’t feel you’re doing anything personally that’s a hard place to be. At least tonight I can feel I contributed,” he added.

At stumps England were handily placed at 247 for two with Ian Bell, the other experienced batsman in the side along with Cook, 16 not out. Cook, assessing the overall state of the match, said: “We’re in a good position after day one. It was quite slow at times because they bowled defensively at us. There are a lot of miles in their legs but tomorrow (Monday) we’ll have to earn the right again and hopefully accelerate later and put some damage on the ball.”

The last time Cook scored a Test hundreds was against New Zealand at Headingley in May last year. Since then, he has made 733 Test runs in 28 innings at an average of just over 26, a sequence that has coincided with England not winning their last 10 Tests — their worst winless streak for 21 years. Several former England skippers urged Cook to resign as captain in order to rediscover his form with the bat. The latest to voice that opinion was Kevin Pietersen, whose tally of 23 Test hundreds is second only to that of Cook in England’s all-time list.

Under the amount of pressure Cook was under, that was quite brilliant! Really happy he got runs. Well done, AC #95

Pietersen, however, praised Cook’s latest innings by telling his Twitter followers on Sunday: “Under the amount of pressure Cook was under, that was quite brilliant! Really happy he got runs.” 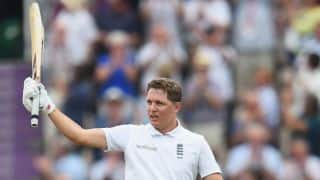 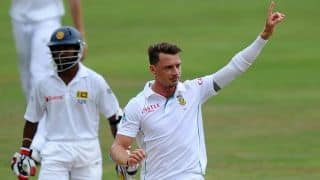